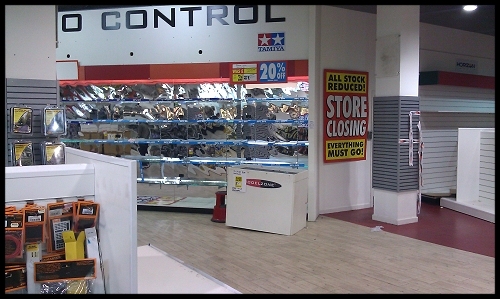 So, Modelzone is no more. The last stores have closed and a brave attempt to build a national chain of model shops has died a death.
Doubtless the shops themselves will now be boarded up and the landlords will get no rent. I always wonder if they wouldn't have been better to have worked with the administrators to try and keep the group alive and bring in some income. I wonder if Deloite could have understood the business better and done some deals, or did they just want to kill of a chain that that didn't understand as quickly as possible to collect the fee?
Modellers will moan a bit but then head back to Hattons to buy their goodies. Some of us will lament the ability to pick up a pot of Humbrol on the high street (not my high street, I'm all right in this respect) but then you can't build a business on the back of a few pots of paint and glue.
I wandered in to the Birmingham branch on Tuesday and left with a bag of knock-down prince materials. It felt like picking over the bones of a corpse and I really felt for the staff stuck being nice to punters but knowing that next week they would be standing out in the cold. I wish them luck.

It is always sad when a hobby shop fails. I have seen it happen several times now, and I do not like it.
Everyone blames the internet and the low prices these online ventures offer. Maybe it's time for the manufacturers to work harder with these bricks and mortar shops to keep them competitive. Let's face it, the online shops benefit from people going to a store and seeing the thing that they want to buy in person.

Bachmann will only sell to a shop with a bricks'n'mortar presence - and full marks to them for this in my opinion.

Modellers do need to understand that it's Use it or Lose it time. If you see a model shop, go in and buy a pot of paint or something. At least this is some income and keeps them alive a little longer.

A few years ago I attended a meeting about "dead ends" and one talk was about high street shops, and was given by the owner of a (successful) high street shop. His basic argument was that the standard model of a 9-5 high street shop is pretty much dead.

One reason is internet shopping. Another is expensive local business taxes (business rates). A third is high property costs and rents. So for a high street shop to succeed it has to provide something the Internet doesn't while also making enough profit to cover taxes and property costs.

Buying the odd pot of paint at a model shop isn't going to do that. What this business owner stated was that high street shops can survive, but they have to change the way they sell. For example, don't stick to opening hours of 9-5; fewer people stay at home during weekdays than before, and those that do are likely to do out of town grocery shopping rather than amble up the high street. Instead open during commuter hours, early in the morning and from 5 PM onwards in the evening, so commuters can pop in on their way to/from the station.

High street stores also need to provide worthwhile services or products difficult to get online. In the model train hobby, that might be weekend or evening classes (my local art shop does this at lot, and it seems to be very successful, despite being noticeably more expensive than the Hobby Craft stores a few miles away). Model shops could commission unique models (ModelZone used to do this, to be fair).

I think it's obvious that some independent model shops are doing just fine. One of my favourites is Kent Garden Railways, and personally I find it's the reasonably priced second-hand stuff that justifies the trip across London. I'll buy some new stuff while I'm there, and while it might not be quite as cheap as Hattons or MRD, my overall feeling is positive because I've picked up a few bargains in the mix.

Bottom line, it isn't a "use it or lose it" situation across the board, but yes, those retailers that can't adapt will likely fold, but other stores do seem to be thriving, and only a Luddite would begrudge them that.

I don't disagree that things need to change but I still find that some modellers would rather go on-line than head in to town and visit a real shop. Price is the only thing that interests them and no amount of customer service will change that. Whitness the numbers who plaugue model shops with junk bought from Toyfairs expecting it to be fixed for free.

Problems with high streets affect all shops and I'd be happy to agree that in many ways the town centre has had it's day, that we should bulldoze the lot of them and accept that people without cars will just have to shop entirely on-line. It's not something I am happy with but realistically, that is the way the worl (at least in the UK) is heading.