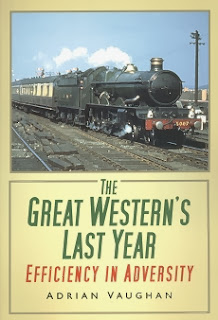 It must have been strange for the GWR board as they sat down for the first meeting of the year on 24th January 1947. By the end of the year they knew that they, and the company that they ran, would be no more. Nationalisation was coming at the start of 1948 and despite all the different railway companies protestations, there was nothing they could do about it.

No matter what they felt, they still had to run things until the various branches of government took over. What they faced was trying to rebuild a system battered by years of war, suffering desperately from a maintenance backlog and starved of both materials and manpower.

Adrian Vaughan takes us through month-by-month telling the story of the last year. He sets the scene looking at both the national picture and some very detailed descriptions of incidents that took place.

One example is oil fired locomotives. poor quality coal supplies persuaded the company to investigate using a more consistent and reliable fuel than the traditional stuff. It worked but then the outside world intervened. Britain was forced to allow free exchange of sterling to dollars as a condition of America loaning us £3.5bn to help rebuild after the war. Oil had to be bought in dollars and the country had none as investors rapidly exited the UK and headed for the land of the free.

This is quite a wordy book but well written. What photos there are often come from the Great Westerns own company magazine. Their age is given away by less than stellar reproduction, not the fault of the printing process as a number of original photos are clear and sharp. There's also too much repetition, the picture of fueling a an oil fired loco is used 3 times, which considering the low number of images, seems excessive. Having said this, the pictures included are often fascinating and not the sort of thing you find in the mainstream press.

Overall, this is an interesting book. If you want nerdy detail, there is some. If you are more interested in the bigger historical picture, then it's here too. To me, this is the strength of the text. Placing events in a historical context that is alien to the modern reader helps us understand why things happened.

From a modellers point of view, it should influence the types of trains he or she runs (you can't have enough coal) as well as the state of the infrastructure they run through. If nothing else, it might tempt you to build a miniature of the jet-powered snow clearing machine!