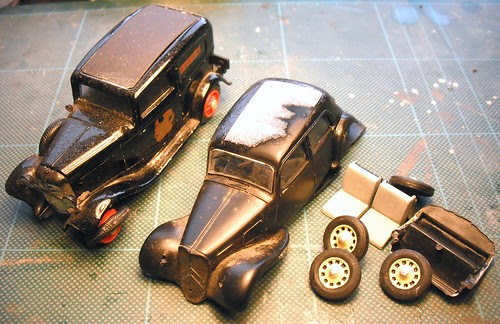 Looking over Clayhanger Yard, I think I need another road vehicle tucked away. Looking around Guildex, I was struggling slighty - there are plenty of vehicles to chose from but they are either too late for the period I'm running the layout, or too expensive. I can't justify £30+ for a single vehicle for this particualr model, even when the kits looks so appealing.

On the back table ot the O Guauge Guild exectutor service I spotted a battered diecast that looked about right. This turned out to be by the firm Hobbcar - who I can find nothing about on the interweb. It claims to be a 1932 Ford which is the right era even though it looks a bit Anthill Mob.

Branded as a Fortnum and Mason delivery van, I had some hopes the prototype ran in Britian. Fot 2 quid, I grabbed it.

One problem was that a wheel had been damaged so I required a replacement. Next on the table I found a battered Traction Avant which looked like it had suitable wheels. 3 quid.

The Ford turns out to be a Model B - a car that appears to have been manufacturered at Dagenham, so I'll get away with it.

On the running board, I found a spare wheel, ideal to replace the broken one if I only display the car with the depression in the wing hidden from view. Looking at the poster on the right, it may be that UK cars either didn't have the spare, hid it away, put it on the other side, or the artist just ignored it.

This is good because the Citroën is a nice model too and far too good to throw away just to use the wheels. An unidentified plastic kit, there are parts missing, as there are on the Ford, but I reckon I can save them both. Neither will be perfect, but they'll look the part and fill a gap on the layout.

You might think a French car isn't ideal for the UK layout, but as I discovered from a firend who owned one, they were produced in Slough, so mine will be a UK built model and this perfect for me.
Posted by Phil Parker at 5:30 AM