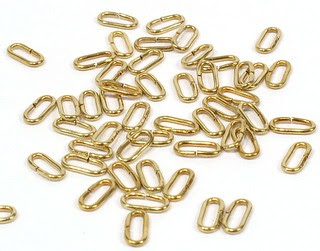 Stuff that should be easy to find at a model railway show No.2 - Coupling chain for use on O gauge wagons.

You'd have thought so anyway. As it was, I searched high and low at Guildex a couple of weeks ago and found none on sale, at least none available as a spare part. You could buy coupling sets with it in but as the wagons I run already have hooks on the end, I didn't really want to pay a premium price to purchase something I wouldn't use just to get some chain.

Just when I was contemplating winding my own, someone pointed me in the direction of Parkside Dundas. On previous passes by the stand, I'd not seen any hung up on the racks and the guy running things was being spoken at by one of the crustier punters so I'd not asked.

Rectifying this a couple of hours later, I was able to order the chain. No, they didn't have it in stock on the stand, but for a few quid, I was promised some in the post. I did this and a couple of weeks later, 50 links arrived in the post.

Great stuff. Now I can replace the links that have fallen off 3 of my wagons.

I still don't understand why none of the 120(ish) stands at the show had something so basic in stock. Perhaps they all think someone else carries it and there is no demand?
Posted by Phil Parker at 5:30 AM