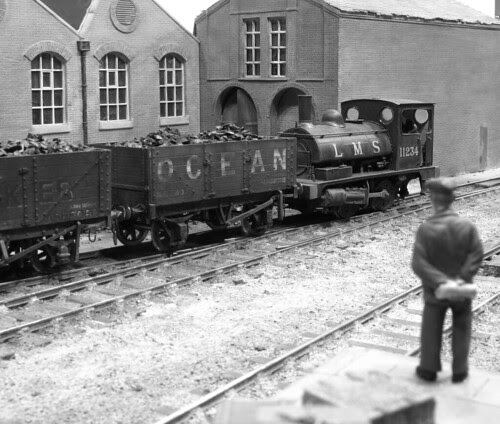 Clutching his copy of "Industrial Locomotives of the West Midlands", Bob Baker watches LMS Pug No.11234 shunting a couple of loaded coal wagons to the boiler house at Clayhanger Yard. In a few minutes, stokers will climb aboard and unload several tons of nutty slack onto the ground, digging though the pile with shovels and the sweat of their brows. Fortunately, the weather is kind today, a cool and dry morning.

It's 1947 and the loco will be transferred into ownership of the new-fangled British Railways. The livery will remain the same although the tank sides will sport the ferret on a unicycle emblem. Sadly, the loco won't survive onto preservation, being scrapped in 1961.

By this point it won't be needed to shunt coal anyway. The boilerhouse will have been converted to oil firing. Fuel will be delivered by tanker to be stored in a new facility built where the pile of coal currently sits.

A few years later and the yard will finally close down and disappear into history. Now, there is no trace of the railway at Clayhanger although several lines still pass close by.

Note: All of this is of course, completely made up. Clayhanger Yard exists only as an O gauge model and Bob Baker is a whitemetal figure permanently staring into space, although in this respect he's like many railway enthusiasts I have seen...
Posted by Phil Parker at 5:30 AM