Dock in a box in Hornby Magazine

With lots of other work floating around, my contribution to the October issue of Hornby Magazine is a bit limited. On the other hand, it's one I've been keen to do for a couple of years - a small dockside diorama.

With the last couple of Parker's Guides requiring kits in the 3-figure price range, it's nice to do something that cost less than a tenner.

Using Scalescenes kits, mainly the free warehouse, I made up a short diorama in a box file. Obviously, if you have more space then you can build a far longer scene, but this is enough for my purposes. 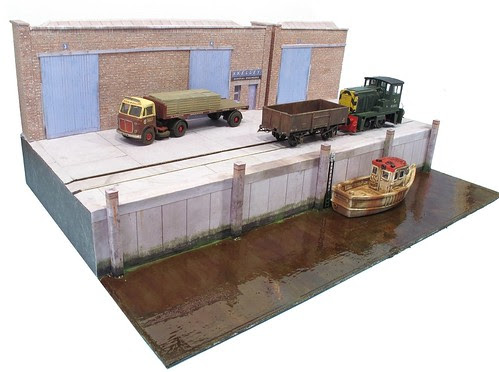 The magazine is a lot fatter than normal this month. The reason is that you get a free layout inside!

OK, so not a complete one, but the trackplan for a very buildable station and yard. Future issues will contain the kits (again, from Scalescenes) to complete the scene. Just add a baseboard, some track and trains. Best of all, if you don't want to build the layout, the structures will still be useful.

It's great to see this model. The idea for it developed over a year ago at a get-together with the main contributors. I have a feeling that I may have been instrumental in coming up with the idea although I can't claim all the credit. Nor can I claim to have done any of the work to bring it to fruition. It's still nice to see it happen though. Let's hope a few people actually build the model. It would make a great little layout for anyone looking to move on beyond the trainset oval.