A small, but important addition to my APT collection 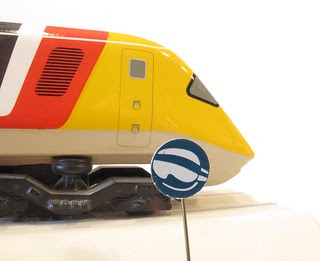 eBay is a wonderful thing. You discover objects that you didn't know existed, and then develop a desire to own those same objects.

Months ago, I set up a search alert for APT stuff. I've mentioned my fascination with this train in the past. Suddenly a pin badge appeared in the results. Not one of the Railriders ones or even some Gomm thing for trainspotters bobble hats.

This is a proper thing intended for engineers at Crewe. The listing didn't seem to know much more but by this point I wanted one. It even has the original, tubular, design of the train on it.

I'm assuming that the badge was issued as a security measure to those working on the project and you didn't get in to poke around at the supertrain without one.

Anyway, the badge sold for the high side of thirty quid which was a bit rich at that point for my tastes.

A month or so later another example appeared. I missed that one too. Then another. I forgot to big on that one.

Finally a couple of months ago, not one but two badges pop up. I bagged mine for a tenner. Which goes to show that if you keep looking and wait long enough, you can always get what you want.

The only problem is, the other badge was an orange one. I've never seen that colour, so guess what I want now.

Mind you, it's likely to be cheaper than the next bit of APT stuff I'm going to want...
Posted by Phil Parker at 5:30 AM