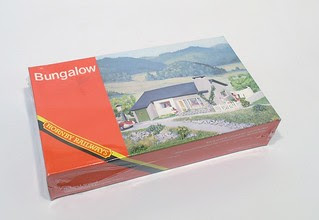 It's a festive week so I'm going to enjoy a project I've dreamed about for many, many, years.

Hornby's R196 bungalow kit dates from the 1970s and I think is a Piko product rather than originating from Margate.

The design is a bit continental. I haven't measured the doors but I bet they are 3.5mm to the foot rather than 4mm. As a building it's very of its time - one of those nice clean 1960s and 70s designs that we were all supposed to be living it while cycling to work or travelling in an electric car.

It could also fit nicely in to a Gerry Anderson programme, perhaps in the suburbs of Marineville or one of those homes that Fab 1 rushes past in Thunderbirds.

I must have liked it, because as a cash-strapped kit, I produced my own version in cardboard snaffled from a cornflake packet. The design wasn't difficult to copy even though I only had a picture in the Hornby catalogue to go on and no measurements. As I recall, I thought my version looked pretty good.

Years later, I was reminded of the model and set off to eBay to try and locate one. After a couple of attempts, I landed a kit for under a tenner including postage. Since then of course I've found another in the back of a cabinet at Hereford Model Centre but we'll let that go. Mine turned up safe an well a couple of days after ordering, still wrapped in it's cellophane. 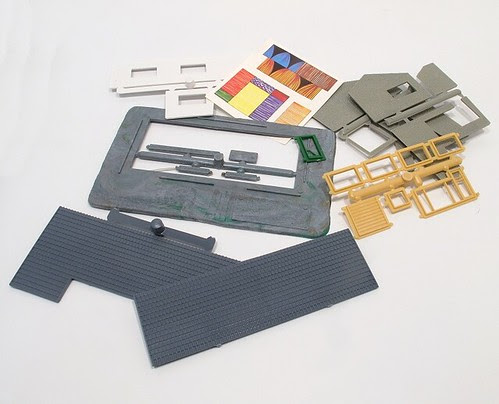 Tearing the plastic aside (the sound you hear is the sharp intake of breath from kit collectors, perhaps with a little whimpering) the parts inside are nicely moulded and mostly in the correct colours. The model on the box obviously hasn't needed the attentions of a paint brush even though it's set in scenery. The exception is the scenic base, weirdly moulded in grey but with some green plastic granules thrown in to marble it.

Anyway, I'm going to build and paint the model pretty much as it comes. This will make a nice change from all that serious stuff. Well, it is Christmas after all.

Yes, it is very much of it's time and, as they say in antique shops, very charming. It makes me think of "Bewitched" for some reason... that suburban bungalow thing going down. It seems a paradox somehow that things like this are actually of the period some of us are modelling...like the Superquick kits...sort of doubly authentic!
Have a great christmas and new year, Phil,
Iain