It's probably a good job that I love ugly things, because the newest arrival on the Isle of Man Steam Railway would test many an enthusiasts aesthetic sensibilities.

Bought in at a cost of £400,000, the 42.5 ton loco will be used to rescue failed trains and during the TT festival for the commuter trains.

I know lots of enthusiasts are going to moan like crazy about the intrusion of an American outline loco in amongst the Victorian steam trains and delightful wooden coaches. However, if it makes the railway more efficient and stave's off other economies then it's a good thing.

We forget that on the IOM, the railway is still owned and run by the government. Although it looks like other preserved lines, it really isn't. Potentially, this could the be a move toward restoring a proper, useful service for residents rather than just a "toy train" for tourists.

There is precedent - Blackpool tramways have recently started running modern vehicles as a service rather than just historic ones with no disabled access, rubbish heating and basic suspension.

If the steam were withdrawn from the IOM, I'd be up in arms. It won't though so I won't be either.
What I would like to do is build a model of this loco. After all, I have its predecessor, Viking, so if anyone can provide a plan, perhaps some G Scale work might take place next year... 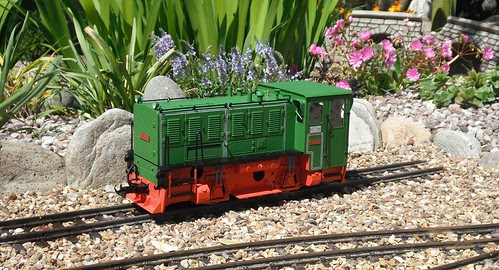 That is pretty ugly.

I think it would halp if they didn't try and paint it like a 'heritage' locomotive and accept that it is a modern diesel. There are similar locomotives in Europe and New Zealand that look more attractive because the paint scheme suits them.

I agree it could be a step forwards to a more 'local friendly' railway that provides a transport solution. We are starting to get this on Narrow Gauge railay here, with trains based on trams so they have good disabled access and a better ambience. And I'm sure the enthusiasts howl, but as many of them don't travel on the trains but drive alongside filming the pretty steam engines, I doubt the railways are listening.

Curiously enough, the San Francisco MUNI have been buying up vintage trams from all over the world to run on the F-Market line, which was originally a tourist line but now serves commuters as well. They have a couple of Blackpool "boat trams", although (it being winter) I just only the privilege of travelling on enclosed US and Italian vintages on my recent trip there (as a commuter, not a tourist),

I really like it. It is purposeful and probably does what it said on the tin...what's not to like? I would rather see the line running rather than having to fire an expensive steamer up for every single train, esp when commuters really couldn't care less what's up front.
I think Andy's got a point, though about the livery...

The IOM steam railway suffers from enthusiasts who want to pickle it in aspic at a date to be decided but certainly around 100 years ago. To me, it is a real railway that just happens to use steam traction. I can see the point about painting the diesel in a modern livery, perhaps based on the Indian Red of the locos but with current touches.

I think it is in what the android community describe as the "uncanny valley". It isn't quite ugly enough to be beautiful. I agree with Andy that a different paint scheme would help. It wouldn't be so bad if it was entirely heritage, but those black window surrounds ares o Class 58. I love the boxiness of the basic design but those cabs just don't work for me. A more boxy Genset style cab would have worked really well but I'm presuming that was precluded by the loading gauge.