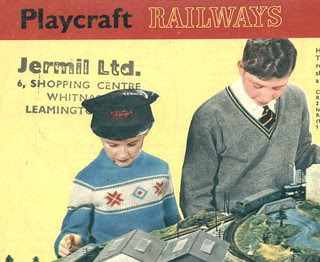 Finding an unexpected model shop is always a good thing. There you are wandering around and suddenly - WHAM - there is a fine emporium purverying goodies for those of us who enjoy the arts of miniture recreation.

Just as intrequing is working out what happened to old model shops that have sadly long gone. Mostly this involves looking in the back of old copies of the Railway Modeller and wondering. This time, things were a little closer to home.

On the back of an old Playcraft cataloguie kicking around our clubrooms, I find the dealers address: Jermil Ltd, 6 Shopping Centrem Whitnash, Leamington Spa.

That's 10 minutes stroll from my house. It's where my dentist is and the place I go to post stuff flogged on eBay. There's no model shop there is there?

Sadly, no. Thinking back to when I was always in short trousers, I recall an old newsagent in the shopping arcade. The address would be right so I assume as well as newspapers and magazines, he also sold toys. Many small newsagents still do.

Anyway, I assume this one had a sideline in model railways and thought a Playcraft concession was a good idea. They were sold as toys rather than models if I recall. The Class 29 is still considered one of the worst ever made...

The newsagent is no longer there. I suspect the owner retired. Newspapers now come from the store/Post Office next door that used to be a VG, or the "One Stop" at the end of the row that used to be a Wavey Line.

The newsagents is now a chip shop. 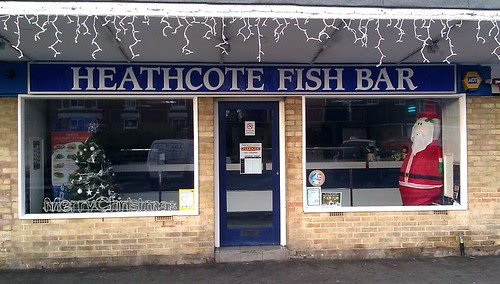 Now, this on it's own isn't that exciting. Model shops close and are replaced by the sort of retail outlets that are now in vogue. I mention the change not just to showcase some top jumpers, but because this isn't the only time this has happened locally.

Just over ten years ago, there was "The Train Shop" in Warwick. It started in a lean-to building and then moved to a proper shop in St Johns, Warwick. From there it moved along the row and then closed.

It's a good job the one remaining local shop is too small to serve fish!

I'm glad I am not the only one who mourns the passing of a good model shop and is interested in what is at the location now.

30 or so years on I still cannot pass without a sideways glance the large modern office block in Brighton which replaced a row of Victorian shops, albeit very run down, in which stood the legendary Kemp Models.
It was the first place I ever visited that had such exotica as SMP track and point kits, a large selection of wheels, loco and rolling stock kits and other things the purpose of which I had no idea at the time.
The sad thing is that even the road name, Queens Road Quadrant, has vanished.

Ok so the shop lived on, first in Hove, then in Bristol, for some years, but it never had quite the same magic......for me at least!

I wonder if the old place is haunted now, I wouldn't be surprised!

Thanks, as usual, for providing a Google Street View link. It gave me opportunity for a very short virtual ramble--interesting building at Smith and Cross Streets. The Roebuck, on Priory, looks like a building with an interesting history.
Very picturesque territory.

I'm pleased to hear it's not just me - I tracked down the old Sayer-Chaplin premises in Ipswich once. It looked as if it had been unoccupied since they left in the early '50's ! Very atmospheric..