A suitable kit for a beginner 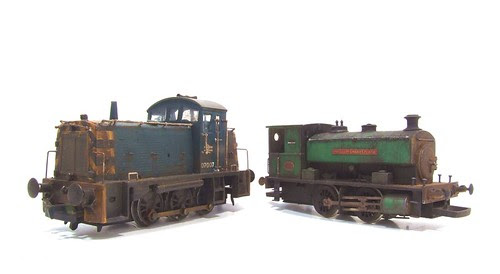 Sitting behind my stand last weekend, not as I suggested in the year 2103, a few people looked at the Barclay shunter on the right in this picture and expressed interest.

I explained that it was a well designed kit that could be assembled without recourse to a soldering iron, that the gearbox was a nifty 2-stager and the model was no harder than an Airfix kit to put together.

Then I told them the price and they ran away screaming.

Others arrived with a fairly typical plan to build their first loco on the cheap. Wheels, motors and second hand bodies were mentioned. There was going to be some chassis scratchbuilding and lots of clever working stuff out.

I tried to be polite but in my heart, all I could see was frustration and failure.

If I'm sitting there, as a veteran of far too many kit builds, and can't envisage being able to assemble the parts mentioned into a working model then it's sad. I really, really hope I'm wrong but I fear that I'm not.

Why? Simple - because that's how I tried to get started and I never made anything that ran properly. Then I bought the 02 Diesel version of the DJH Starter kit and built a model that worked well enough to run on my mates high-profile exhibition layout.

So, when beginners ask me what their first loco kit should be, I point to one of the two above. If you don't want £145 worth of steam engine, try the £32.50 worth of Silver Fox Models 07 shunter sat on a second hand Bachmann 03 chassis.

If you don't know that you are doing, the way to learn is (sadly) not to pick up a rubbish kit from a second hand stall. It's to spend money of something that will go together. £30 spent on a kit that remains a pile of bits in a drawer is far more expensive than £145 on a kit that will soon be running on the layout. I know that sounds daft but it's true.

If it's any consolation, the same applies in the world of model boats. Many beginners buy a cheap(ish) RTR boat under the impression that replacing the radio gear and drive equipment with decent parts will be easier than building a kit.

It's not as the RTR boat is designed to be assembled in a factory.

The kit, on the workbench.

Also, with the kit, someone has done all the thinking for you, if you've bought wisely by listening to more experienced modellers that is. Tackle the RTR boat and you're having to make it up as you go along - easy with experience but when you don't have this. Well, you probably end up with a broken boat.
Posted by Phil Parker at 5:30 AM

£145 for a complete (no hunting around t'net looking for wheels, motor, no wondering which gearbox from which manufactorer will fit), well designed kit that will go together easily and actually work? Sounds fair to me...
I have built the DJH kit, and it is nice.

Hello,
For the 0-4-0, do you know if there is room behind the buffer beam for sprung coupling hooks?
Thank you.

Paul - Good point. It's easy to underestimate how difficult it is just to bring all the ingredients for the kit together if you've not done it before. Once my local model shop carried Romford wheels but no longer.

Anon - I think there is but to be honest, I've never seen the point of sprung couplings hooks in 4mm anyway.

I think the issue with the £145 kit is that unless you have a desire for that exact model, it's an 0-4-0 steam loco and for the same money, you can buy a detailed RTR mainline loco.
I'm not suggesting for one second that it isn't worth the money, but as a starter kit, it's supposed to be an introductory model which by definition is appealing to people who do not have much kit experience and so confidence is typically low in producing a quality model. Not many people can justify the cost in this economy if they're not sure they can produce something of equal or better quality then the RTR market.

The Class 07 option is a much better one, (not just because I'm a Lincoln resident with an interest in all things Ruston,) it gives you a known working chassis and lets you concentrate on producing a good body. I'm assuming there is a steam equivalent for similar pricing, (I'm an 80s kid who grew up in the shadow of Whitemoor yard so diesels are my thing).