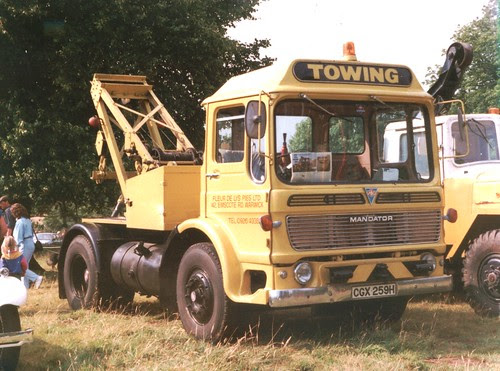 Odd-ball road vehicle time. Dating from 1970, this AEC Mandator tow truck is being shown off at a vintage vehicle festival. The photo dates from the 80s so the lorry may still be in service, although why it would be at a show is an interesting question.

Why does a pie company need such a big tow-truck?

I'm not even convinced by the address - it's a row of terraced buildings that have been around for well over 60 years. There was a Fleur De Lys factory nearby though.

The brand was swallowed up (pun intended, they always are on my blog) by the Holland Group in 1972, which might explain why the vehicle was sold on to a collector.
Posted by Phil Parker at 5:30 AM

Without wishing to sound insulting, when I inspected the photo in detail it looks to me like "42", with the line of the cab door providing the one.

It's used for pies as it can no longer pull the skin off a rice pudding...
CF

Matt - That would place the factory where the Tesco store is now which makes more sense.

Maybe they had a fleet of particularly unreliable pie delivery vans.