Planning is important. If you are developing a product, it pays to make sure you have all the parts before putting them in the box. I'm not sure Piko were operating at the peak of German efficiency when they designed this bungalow kit. 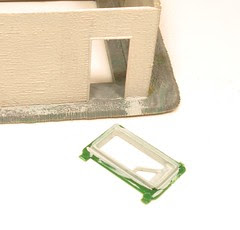 The first thing that makes me wonder is the back door. It's not on any of the main sprues. Instead it rattles around the box as a separate item.

The design is odd - what's that handle thing moulded in. And why do you have to trim a flange off the bottom to make it fit the hole? Why is it moulded in bright green? I've had to use 2 coats of Humbrol 147 on it to bring the surround in to line with the rest of the doors and windows.

Next, we have the paper sheet containing curtains and blinds. No matter how I squint at the box lid, I don't see the same window fillers as I've been provided with.

The curtains aren't too bad. By separating each swag, running a black pen along the exposed edge and fitting with PVA, they look fine. A rectangle of black card behind this hides the lack of interior - the building would look fab with one but I'm too lazy/busy to build it.

The blinds though don't really match anything. They are lovely 1970s colours and if you can live with the idea they are closed all the time, brighten the building up nicely. It's just that they need to be chopped around a bit to fit the panes of "glass". 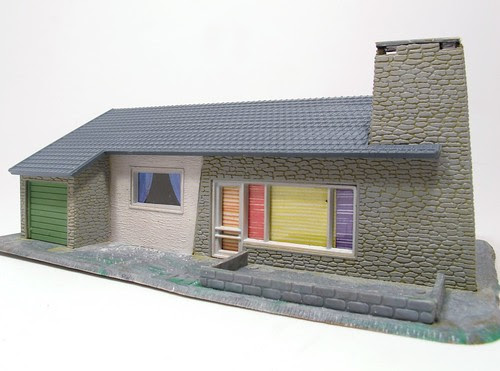 Finally, the roof is on. This only just reaches the far end of the walls if the cutout for the chimney is fitted hard against it. I could have left a gap to be covered with lead (paper) but this might have looked odd. It would be much better if the part were 3mm longer.

I'm not convinced by the tiles either. It looks like the designer has used the odd trick seen in many old plastic kits of representing groves, in this case the gaps between the slates, with raised lines. I might be wrong and they are some sort of oddball continental roof tile of course so I'll let it go for the moment.

Nope, never seen any roof tiles like that around, and I'm the person who actully lives in Germany! Seems like piko were trying to cut to many corners in my opinion!

Not sure about the tiles either, but from experience in a german carpenter's the door prototypical: you'd be amazed at the fidding about we have trying to get them to fit.