How to make a 4mm scale snowman 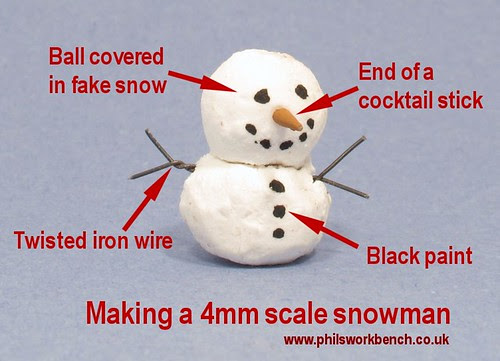 Yesterday, my bloggy Christmas card featured a 4mm scale snowman. When I thought of the idea, it all seemed so simple.

In theory, all you need is a couple of small balls and some wire. And perhaps a tiny carrot.

The balls came from 4D models and are made of compressed paper. They also sell sponge versions which I tried as well. The balls are fitted to a length of brass wire like a kebab. That's a tough bit as the wire doesn't just poke through the paper. The trick seems to be to drill a pilot hole in the top, not the bottom which has a hole in. 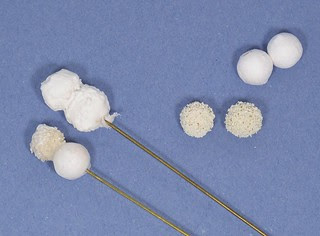 Next, the balls are covered with PVA and dipped in snow. I used some from Precision Ice and Snow. Once dipped, the excess was shaken off. Another layer was applied using hair spray as a glue. And another. Finally the surface was sealed with spray varnish. The result on paper balls was realistically uneven, just like the snow on a ball made by rolling it around the garden. Sponge balls are less successful so don't bother with them.

After that, things are a lot easier. The tiny carrot is cut from the end of a cocktail stick and glued in place with superglue. A touch of orangy-brown paint finishes this off. The twiggy arms are fine iron wire twisted and poked into pre-drilled holes.If the snow falls off when you drill, just glue it back with PVA.

Finally, some "coal" from black paint provides buttons, eyes and mouth. I had contemplated a hat and scarf but decided my real snowmen never had them so my model would follow suit.

There is probably an easier way to do this but I'm pleased with the result, even if it did take 3 goes to achieve. How come the simple jobs take the longest?

I've also noticed that things that should be easy rarely seem to be - and they often take ages.

This seems to be the way with model making - although this can be very frustrating, it's also what makes modelmaking challenging - and interesting.

I'm sure many of us could give our own, personal, examples of this sort of thing - I know I could - and this is one reason why many of us can identify with what you're saying.

If I really wanted to, I'm sure I could go into a shop and buy any number of ready-made models of a wide range of prototypes. I'm sure that at least some of these models would be very good, too.

How many of them I'd be able to afford is another matter - as is how many I'd really wish to buy.

For me, the real enjoyment in modelmaking (well in any practical hobby) comes with working out how to do something - muddling my way through - and then being able to say that I've achieved whatever I set out to do.

It can also be interesting to get the chance to apply stuff I've learnt elsewhere - or to try working out a few ideas of my own (some of which might even work ...).

In other words, it can be nice to see a few things fall into place by themselves - but there can also be more of a sense of achievement if a few things require a bit more effort, a few more tries.

"I love it when a plan comes together" - and all that.

I wonder how many of us would have it any other way.

Huw - My feelings exactly. If we just bought everything, there wouldn't be any fun or any satisfaction.

The easy things being difficult apples everywhere too. Job on the car that should be five minutes with a spanner? 2 hours because of a seized nut.

Job you have been putting off because it will be a nightmare - 5 minutes as it's not as bad as you thought.