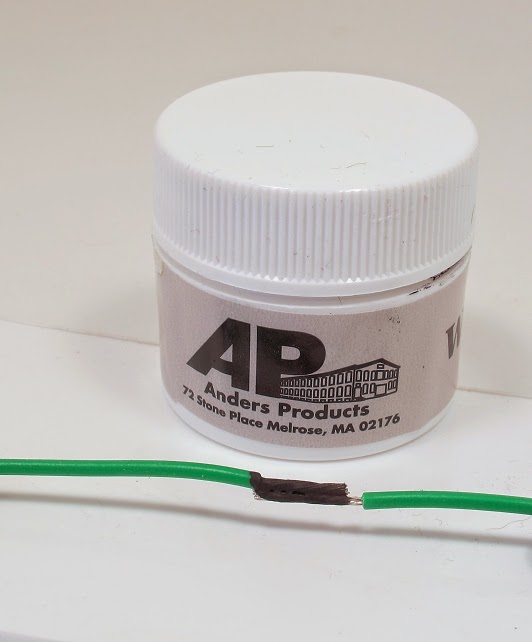 Can you make electrical joints without soldering?

According to the Internet, you can. All you need is some "Wire Glue".

I spotted this stuff on eBay a few weeks ago. It's all over the place in the webs number one tat bazaar - every day my search for items labeled "Yacht" brings back at least 10 rests a day for the stuff, rather negating the benefit of the search.

Anyway, curious, I spent the cash and bought some. Opening the pot, the contents are a grey paste that requires lots of stirring to reach an even colour.

My test was a pair of wires held in contact with some Blu-tack. The exposed wire ends were dipped in the glue and then the pair were held together to dry. An extra dollop was smeared on with a screwdriver just for good measure.

Drying takes several hours according to the instructions (1-nil to solder) so I left it overnight.

In the morning, success. The joint conducts electricity so it certainly works. The mechanical strength isn't as good as solder - you can pull the wires apart - but it's not too bad.

In conclusion, I'll not be ditching the soldering iron. This stuff takes too long and I'm suspicious of the joint strength. The drying time could be a problem as you'll need to support the joint for several hours. I can see this as a useful addition to the toolbox though as if you don't want to heat a joint then here is a workaround.

Find Wire Glue on eBay
Posted by Phil Parker at 5:30 AM

Having just destroyed an OO9 gauge point when soldering some dropper wires to it (my fault for rushing and not letting the thing cool adequately between joints) I can see it being useful and resulting in less melted sleepers.