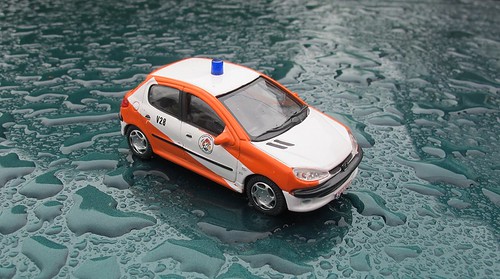 Sticking with yesterdays diecast theme, at the same time I bought the G&G bus, there was another model I have been looking for a - a Peugeot 206.

It's a nice shape, about 7mm scale, and very similar to the one I own. The manufacturer is the famous 80's pop group Carmaramama.

In fact there are only a couple of differences - the blue light on the roof and the colour. Oh, and the left hand drive thing.

I've been looking for a model 206 ever since I bought the real one. Owning miniature versions of my vehicles is a bit of a thing for me but whereas the VW's were reasonably easy, more mundane cars are far harder. Until finding this, the closest I had managed was a rally version with extra spoilers. You might get lucky with Oxford Diecast picking your motor for a model, but I have a feeling that this is some years away while they work through the contents of Practical Classics magazine.

Anyway, all I have to do now is lose the light, change the colour and decide if I can live with the steering wheel in the wrong side. Disassembly is easy - two screws in the base. What I wonder is, how do I deal with Peugeot logos on the front and back? One trip in to the Nitromoors and they will be history.

I suppose I could repaint my car to match the model but that would be a shame as I have a can of green touch up spray to hand. It does look good in white and orange though...
Posted by Phil Parker at 5:30 AM