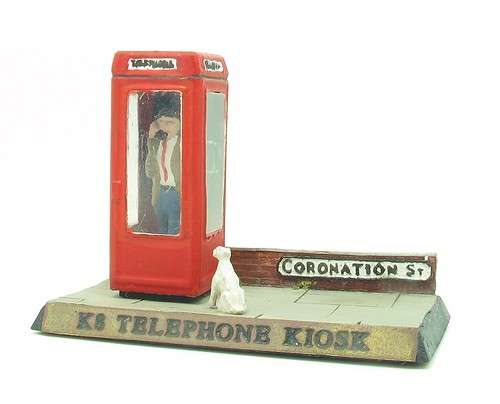 Writing yesterdays post about the National Vintage Communications Fair, I linked off to the Wikipedia entry for the K8 telephone box. According to the ever reliable site, there only 12 of these little structures left in the wild.

How did this happen?

When I was a kid in the 1970s, they were everywhere. Classic K6 boxes (the ones you think of when someone says "Telephone Box") were uprooted for these more modern versions. No shopping precinct was complete without a couple of them. Years ago, the design said modern...

According to Gavin Stamp, the K8 was designed by Bruce Martin, an architect who had on pre-fabricated school building methods. Originally to be cast in aluminium alloy, the Post Office decided that this was insufficiently robust and replaced with cast iron, a material they were far happier with. They also painted it red rather than the unpainted metal originally specified.

The first order was placed with the Lion Foundry in January 1968 for 1000 kiosks at a price of £100 or £68 per kiosk less than the older K6 design. The first example appeared in Old Palace Yard, Westminster 7 months later. 11,000 followed.

If there really are only 12 left, I think that is sad.

Modellers note: The model is Shire Scenes etched kit sat on a Games Workshop plastic base. The figure comes from the Merit telephone box, the dog and road sign from Langley.

There is a Flickr group for photos of K8 kiosks here. 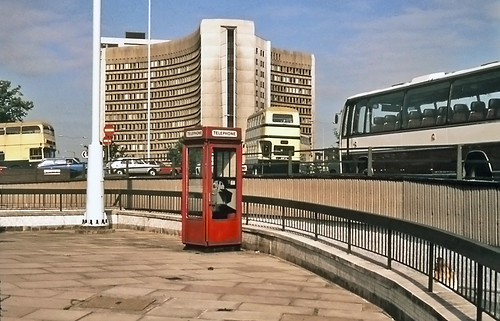 Email ThisBlogThis!Share to TwitterShare to FacebookShare to Pinterest
Labels: Telephone

The Twentieth Century Society have an article about the K8 on their website:

Although a lot of these boxes have been removed, I suspect that rather more than a dozen of them survive - even if many are empty, or being used for other purposes.


Returning to your blog, I liked the photo of a K8 in Birmingham.

Aside from the fact that some people (motorists as well as pedestrians) might find junctions like this one rather intimidating, it's also interesting to note the scale of everything.

Even from this close up, the phone box is still dwarfed by Tricorn House.

It's probably best if I don't suggest that there might be Five Ways of putting these phone boxes together ...

In Canada, they replaced the old telephone booths with wall mounted ones with no doors whatsoever.
Most of these are now gone as well, as most people have switched to mobile phones.