Heading over to Rugby for the Slim Gauge Circle event, I passed the Warwickshire Exhibition Centre and noticed adverts for the National Vintage Communications Fair. The car park looked busy and I've always been interested in old radios and telephone boxes - I've always wanted a K6 and the much rarer K8 - so after lunch I dropped in. 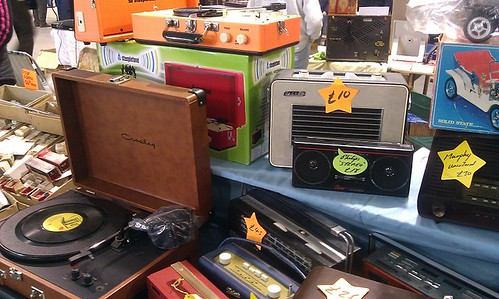 The hall was busy. Really busy. The first stall I see is selling components. Proper, electrical components for repairing old electrical items made in the days when people like my mate Dave fixed them. In the distance, a large illuminated sign that read "Valves".

I trawled up and down the lines. Near the door were old telephones and telephone equipment. If you remember 'phones with dials you'll recall that in the middle of the dial was a circle of paper. This usually contained your number and details of the emergency services. These are not collectible. There are albums designed to hold them.

At the side of the hall, the Telecommunications Heritage Group had set up a couple of small exchanges and a few old 'phones for people to try. If you'd never worked a dial 'phone before, now was your chance. I did but then I remember - as did most of the people in the hall judging by the apparent ages. Of course, nostalgia is all very well, but I do remember how slow the process of dialling used to be...

Anyway, moving on, I was in vintage radio and TV land. As far as the flickering tube is concerned, 625 lines was years in the future, as was colour. Great cabinets to micro sets from the 1980s took stand space. The early ones are especially collectible judging by the prices. Mind you, back in the day, they were seriously expensive so not many purchased them. Those that did would have relegated the set to the loft once a newer model arrived to replace it so survivors aren't going to be that common.

I largely ignored the record players and I never owned one when vinyl was king, but moved on to the radios. So many designs! 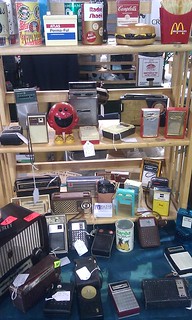 More Bakelite and wood - exactly what you'd think of when imagining a collectible wireless. Unlike the TVs, you can still used these for the job they were built for. OK, you can't get DAB but then around here the signal is patchy anyway so nothing changes.

It was at this point, I had to think about leaving. You see, the more tempted I was to buy a little collectible. Perhaps a novelty radio collection wouldn't take up too much space or cost a fortune.

As it was, I came away with a Sinclair DM2 multimeter because of my old home computer allegiances. Were money no object a tiny, beautiful scale model of a lathe for £360 would have come home for no other reason then it was amazing.

Talking of home computers, there was a mint, boxed ZX81 for £50 and a few BBC Micros including one with a, now useless, Teletext adaptor. I think I spotted a One Per Desk (OPD) micro too that I identified by the microdrive slots on the front.

I am such a nerd.

I was even tempted by a stupidly cheap standalone Teletext adaptor for a TV. That's stupidly cheap for a box for an excellent service that no longer exists anyway.

Anyway, an absolutely fascinating event. Have a look at my photos on Flickr.
Posted by Phil Parker at 5:30 AM

We have some older dial telephones for our theatre company. When we used them last one of the younger members looked at the phone on the desk and said "What's that?"

We saw the sign and drove right on by

Amazing stuff,
When I left school back in 1967 my first job was working in a radio & TV repair shop, I can remember seeing some of those sets being bought in for repair.
And repair them we did, unlike today's "Throw it away" technology.
I sometimes wonder if we have really moved on that much really?