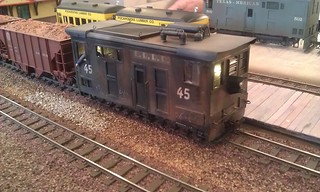 The SGC meeting at Rugby is a funny event. You never quite know what you are going to see, but the chances are it will be interesting.

Walking in, there was a modular layout being set up and another more traditional display already lit and working. This provided the first surprise of the show - it was operated using an iPod. I've heard of using smartphones/iPods/tablets to work model railway layouts but not been so close to one being worked this way.

I can certainly see the logic. Instead of the usual DCC controller button-fest, the display just showed the controls you needed at that point. For the technically challenged this ought to make things easier, although I can see a lack of tactile feedback might be an issue.

Moving in to the sales area where seemingly random people grab a table in the bar and flog leftover models or extras from their collection of exquisite Korean brass, Neil Briggs had a selection of 3D printed conversion parts for N gauge models. He supplies new cabs, tenders and boiler furniture that the modeller fits to RTR locos. 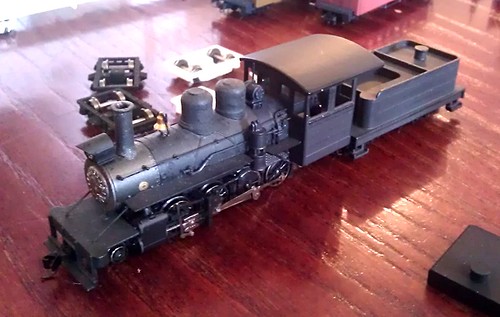 You can see Neil's Myner Models products at his Shapeway Shop.

These looked really good and pretty simple to use. If I was looking for some US projects, I would have been handing over money. Maybe in the future...

The Phoenix Group had the usual selection of exceptional large scale modelling on display. Most of the items were part finished and displayed in raw plasticard allowing us to see just how good the workmanship is. The part finished Japanese logging train shown on a piece of wood with a rather large worm appealed. 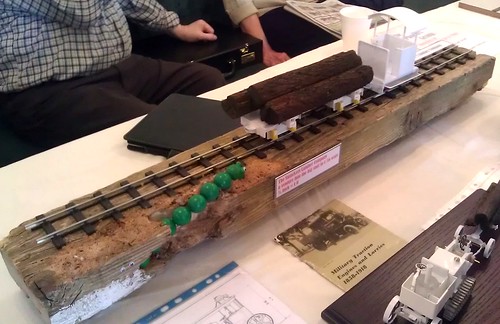 While looking at this, I discovered the book "Military Traction Engines and Lorries 1858-1918" and am now on the lookout for a copy for a future project. If you have one, please get in touch.

I'll admit that this was one of those shows where I could have lightened my wallet considerably. Of course EDM Models would have taken a chunk but I'd have brought home some of the contents of the interesting tables too. It's that sort of event.

That boxcab (in the first photo) looks very interesting.

Do you know anything about it?

It's scratchbuilt on a HO loco chassis apparently. Very interesting and ugly loco - just my sort of thing!