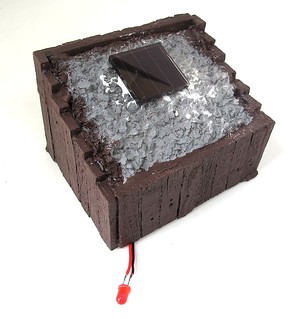 According to the instructions Pendle Valley Workshop supply with the buffer stop kit, "To bring the stop lamp to life, just add the optional inside mounting switched battery box.".

That's all very good but then I need to remember to change the batteries. A far better idea in my opinion, if to power the thing with captured sunlight.

A cheap outdoor solar lamp was picked up for a quid from Maplin (that's only 5p more than the battery box). Wanting only the top bit, the shop were happy to throw away the pole and clear plastic bit for me which saved space in my bag during the day.

Taking the lamp to bits isn't easy. The wires to the solar cell are covered with hot glue. Peeling this away with pliers removed one wire but I needed a soldering iron for the other. Pulling the cell from the casing, I fitted new wires and then glued it to the artificial ballast/coal lump. Setting the panel in flush would have been nicer but I should have done this before assembling the bits. Never mind, it won't be that obvious. 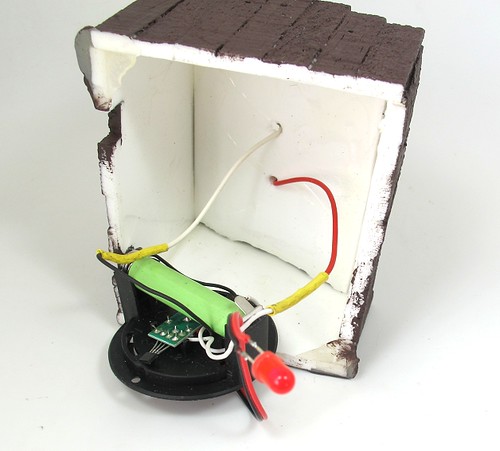 A quick test with the my multimeter showed that the panel was pulling over 1v out of the sunlight to charge the internal battery.

Anyway, the lamp LED was de-soldered and replaced with the kit red LED attached to a couple of long wires. If you try this yourself, test the setup as LEDs must be connected the correct way around. Fortunately there doesn't seem to be enough current to blow it if you get it wrong. Guess how I know.

With everything lashed together, all seems OK. As I write, dusk has arrived and we still seem to have a glow from the LED and that's with minimal charging today. Hopefully once the light gets at the solar cell, the battery will be full and we'll have a proper glow in the early evening.
Posted by Phil Parker at 5:30 AM

As the light only seems to come on in the dark, why would you be running your garden layout then?

The lamp comes on at dusk, and with lights in the trains, I might be running.

More importantly, it looks nice even when trains aren't running. Automatic lights make the line appear alive even when nothing is operating. I think it's something to do with it being on show all the time and so a miniature real world rather than a model as such.

You could always disguise the solar panel with some more ballast. For more helpful and useful suggestions you know where to find me. ;)