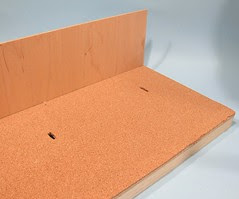 Sidings and yards on the real railway aren't known as homes of perfect ballasting with nicely formed shoulders. Most were second hand rails on old sleepers held in a bed of rubbish. There would be some granite in there perhaps but also a lot of ash and dirt.

Despite this I've laid some 2mm thick cork on the baseboard top. Its stuck down with PVA glue but only where the track is. I filled the gap between the lines mentioned yesterday and smeared it around with an old RAC member card. Then the cork was rolled out on top and weighed down with piles of magazines. At last a real use for them !

One dry I've opened up the point motor holes using a sharp knife. The rest can stay until I've progressed further. My thoughts are at the moment that there will be a bit of a shoulder in some places whereas in others, around the engine shed for example, will be left solid. I'll also chop some cork to give a little ground contour.
Posted by Phil Parker at 3:48 AM