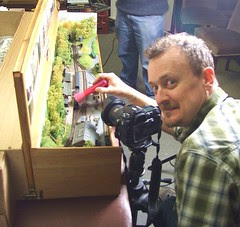 There's nothing like taking a photo of a model to show up it's faults. The eye ignore minor niggles, spots and dust but the camera lens doesn't. So, when taking close up pictures it pays to give things a quick brush to get rid of any dust. Forget this and you'll regret it when you view the photos. I know, I have in the past.

Mine wasn't the only layout photographed during Saturdays session. Fellow club member Tim has built a couple of beauties that also spent some time in from of Mr Nev's camera. Every so often before pressing the shutter button, he whisked a little bit of detritus away using a handy brush I'd brought along for the purpose. Obviously a pro photographer doesn't come unprepared but my little brush apparently worked better than his big yellow version.

The brush is a bright pink retractable nylon bristled device around 6 inches in length. And yes we did make all the jokes. It works though.

At this point I should tell you where to get your own brush. I would except that mine came from Hawkins Bazaar years ago and despite searching their website it doesn't appear to be available any more. That's a pity as it is very handy. If anyone can suggest an alternative supplier, let me know and I'll let everyone else know. 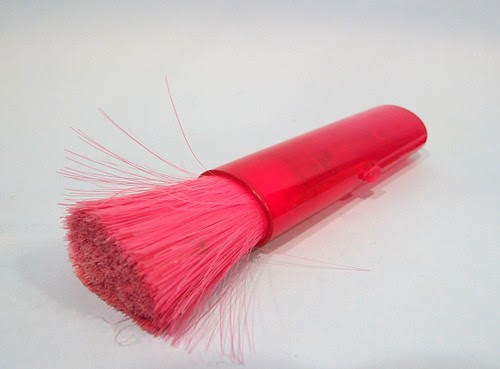