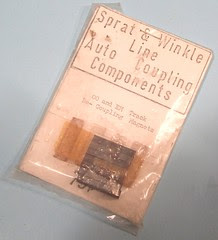 Digging through my stash for some magnets to operate the couplings on the layout in a box, I found these.

I’ve no idea how old they are but looking at the photocopied header card with text that owes nothing to a computer and everything to letter stencil sets, I’ll take a guess at early 1980’s. They are even described as “Sprat & Winkle Line” coupling magnets after the railway to Redbridge modelled many years ago by Derek Munday, the inventor of the couplings. Best of all, the price for a pack is only 75p instead of todays £4.

How things change. Nowadays you wouldn’t think of producing a header card without a computer. The results will look professional but lose that homely touch that characterised cottage industry suppliers quarter of a century (yes, I know, it is a long time isn’t it) ago. I suppose this is progress but you have to wonder if we aren’t losing touch with our roots a bit. I mean, when these were new, modellers would happily take some RTR, chop it up and throw chunks away to make a model that would now be surpassed in quality by average out of the box products today. We moaned that Johnny foreigner had better goodies on the model shop shelf but the craft based hobby in the UK compensated for this with all sorts of odds and sods (most of which seem to be in my cupboard actually) to assist our efforts. The end results had, like this packet, character.

Of course the magnets will still work fine. For reasons I don’t understand, permanent ones never wear out. I’ve even dug them out of old layouts to re-use them in the past. A little bit of history buried in the ballast.
Posted by Phil Parker at 5:36 AM

I think it depends on where you're coming from. Yes, it has changed, but compared to the industry here where everything is made in big factories it's still a cottage industry. It's a lot cheaper too...

I still get that feeling when I purchase from some small DCC-decoder manufacturers, which are obviously very small operations but producing a great product for a reasonable price.