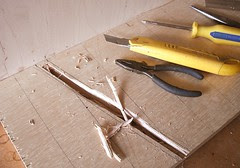 While the track is being built, I've been hacking away at the baseboard to open up the culvert. It's a bit of an experiment really as I'm going to have to make several more holes in the top, none of which can be bodged with a bit of polyfilla either.

Work started with a Stanley knife. It made an impression on the plywood top but wasn't really going through properly even if the cut was nice and neat. I suppose I could have persevered, this and regular blade changes would have worked eventually. In the end though I used an fierce (big toothed) Exacto saw which made short work of the wood. Obviously I couldn't make cuts along the board but grabbing the wood with some pliers or levering with a screwdriver and breaking it out worked OK even if it was a touch messy.

Next a wood rasp cleaned the edges back to the sides of the wood giving a reasonably tidy gap. It's a vicious tool, and one of the few files you don't want to rub on your skin, but a great way of removing wood quickly.

Finally the sides have been tapered with the big knife. The resulting channel is somehow deeper than I expected but that's not a problem since it will be filled up a bit to produce something like a correct contour. The mess has been brushed out into the bin - well most of it anyway.
Posted by Phil Parker at 2:28 AM

Email ThisBlogThis!Share to TwitterShare to FacebookShare to Pinterest
Labels: Layout in a box, model railway, scenery