Model boats in the shopping centre 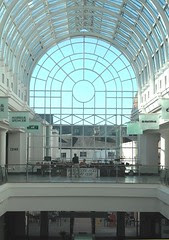 So why did we chose Saturday, the hottest day of the year so far, to spend inside a great big greenhouse ?

Because we love our hobby and want to introduce more people to it that's why. And we didn't know it would be the hottest day of the year so far.

The plan went well* - on Friday night a load of tables borrowed from work were assembled at one end of the Royal Priors Shopping centre. Handily by JJB spots and the ladies floor of M&S to provide a waiting point for bored husbands, it was the spot the centre management had allocated for us. It's probably the one that can least easily sell to commercial concerns too being the other end of the building from the entrance, but that is fair enough since we didn't have to hand over any cash for it.

Empty of boats the display space looked huge. After the Warwick event, we knew we could put on a good show but we'd planned for an extra 8 feet of frontage. Despite this we were confident and the next morning proved to be right. Over 30 models of all shapes and sizes filled the tables. Everything from RTR fishing boats to a huge live steam Mississippi paddle steamer turned up. In the centre we put a big lifeboat along with a collecting box for the RNLI.

The day started slowly, that good weather deterred the crowds who decided that sitting in the local park was a better way to spend the time. Happily though the shopping centre cooling systems worked well and despite being warm, the temperature never became unbearable.

Those people we did talk to seemed genuinely interested. We were promoting our open day on the 6th June and hoping that we could increase membership by a couple of people. Most of the visitors had never seen anything quite like the display on offer. "Who makes these ?" was one of the most common questions followed by complete surprise when we said that we had.

A few potential members did appear. When someone casually asks if all the models "are RC" then you know you are onto a winner. No one who isn't a bit of a modeller would say this and after a chat to a man who built static models I handed over the leaflets with the hope he'd come down and see what we were up to. That's stage 2 - get them down to have a sail with someones boat and meet club members for some laughs. After that they are hooked and the decent into a world of fibreglass hulls and waterline worries is assured.

*Apart from getting stuck in a cargo lift for 5 minutes but the staff quickly got things working again. Who knew you could get a mobile signal from in one of those ? 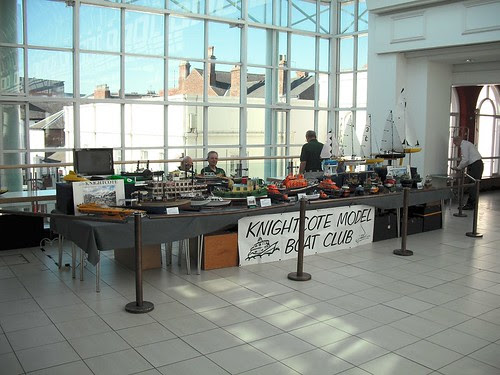