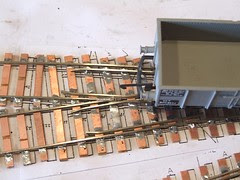 While my Dad is happy to build the trackwork for the little model railway layout (must think of a name for it sometime), he prefers to leave the tweaking to me. He says that it's because I'm better at it. I say it's 'cos he doesn't want to spend ages rolling wagons back and forth over an inch of railway and making tiny adjustments to get the running spot on.

So, having loaded the latest arrival from Lovefilm into the DVD player at the end of the workbench (Disk 2, series 1 of Blakes 7 since you ask) I sat down to perform the dull but necessary task.

The plain track was fine of course, All (!) I had to do was put the wing and switch rails in the right place. Then move them tiny amounts until my test wagons ran through without lumping. Clever people will understand the relationships between rails that makes this stuff work. Me, I use trial, error and some handy little aluminium gauges from SMP that used to come in the point kits.

This is of course the great thing about PCB track, idiots like me can keep altering things until they work. Try that with plastic chaired track and you have a whole lot more trouble or at least molten lumps where those beautiful chairs should be. The results might not look quite as nice but if it works I'm not too fussed. The trick is to find your level.

Anyway, three points took me about two and a half hours because I wasn't working in a rush and also had time to enjoy some wobbly sets and top quality action. If I'd been in my P4 monastery then doubtless it would have been quicker and silent, but then I wouldn't have had the work of Matt Irvin to inspire me would I ?
Posted by Phil Parker at 2:38 AM