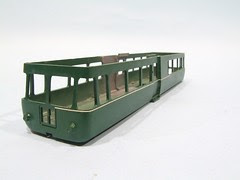 Airfix, bless 'em, helped the modeller to line the Park Royal Railbus by moulding raised lines where the yellow should be painted. They did this to most, if not all of their kits. While it's an idea, tradition has it that we modellers spend ages scraping them off as it's not de rigour to make use of them.

My railbus arrived with the lines flattened so now I've whacked some paint on it's lining time. Hooray !

First up, I have some lovely Fox transfers. Along plastic tub was filled with water and the first line floated. After it released itself from the backing, I slid it onto the bodyside.

Where it broke and curled up. I threw it in the bin and tried another one. This time I cut a length off, enough to do half a side and part of the front. Once on the bodyside I poked it around a bit and then it broke.

So I got more out and tried again. You know what they say about not succeeding first time. In fact I try, tried again so much that I used a quarter of the pack. The results are in the top photo. Nice, straight and nearly in the right place. You'll notice that the line only extends half the length of the vehicle - because attempts to add to this went wrong.

The problem is that the Fox transfers are too good. The lines are thin and there is no excess transfer backing so the results when applied by someone competent are absolutely top notch.

In my box of bow pens I found my old school compasses which included a bow pen. Setting the distance and filling the pen with cream paint, I had a go. The result wasn't bad. In fact it was good enough that I carried on all the way around the body, both top and bottom lines. A little touching up with a normal bow pen followed by some bits of green to tidy up the lines.

In the photo, the results look horrible. In real life as long as you are a suitable distance away (say, the next room) it's acceptable to me. OK, so the transfers would have been better but I do need to get the hang of bow penning and I was hating the first goes. Anyway, a project less than perfect but finished is (to me) better than a perfect but incomplete model. Anyway, it's my train so I get to choose.
Posted by Phil Parker at 5:13 AM