Eating custard doughnuts in the gallery 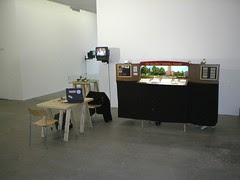 Last week, Evan commented on my post mentioning that a local contemporary arts gallery director that likes his work and is very keen for it to be displayed. This reminds me I ought to post this story:

In 2003, our model railway club received an unusual request. The Ikon Gallery wanted to rent a small layout for part of an art exhibition. Intrigued, I answered the call and a few days later, Nigel, the director called in to see the Hellingly Hospital Railway. He was absolutely delighted and we they would borrow the model for three months. I would be required to attend a couple of times a month to sit beside it and demonstrate model making. In addition I was to fill a display case with examples to explain the hobby to gallery visitors.

On the appointed day, a van arrived to collect the model. I followed by train (the Ikon is in the middle of Birmingham, not an ideal; drive but easy train ride)to set it up. Our bit of the gallery was upstairs in a big white-painted room, not like the sort of exhibition hall we are used to at all ! The entire building was being given over to a huge installation by the artist Rirkrit Tiravaninija Rirkrit Tiravaninija called “Demo Station no.4”. Downstairs he had recreated Bar El Batey from San Juan. This was complete with pool room and bar along with some political drawings. Upstairs was home to a changing display of peoples creative hobbies. Along with myself, we saw calligraphy, origami, golf (?) and many others. The idea, as I understood it, was to celebrate ordinary people’s creativity and to look at the boundaries between what we traditionally define as “art” as produced by artists and the output of those not formally trained.

Each display was accompanied by a video made of its creator showing them talking about their hobby. Mine was filmed at home with the modeling board on the dining table. As I recall I rambled on about the different aspects for the hobby whilst one of our cats decided to “help” out. This made the final cut with cats being a common feature on many of the films. For someone not happy in front of the camera, I thought that the end result was pretty good. All the efforts to get a copy of the tape were in vain unfortunately as it’s a souvenir that I’d have liked.

On the opening night I turned up looking presentably smart and operated Hellingly for the entertainment of the first night crowd. They were a rather different group from the normal audience, better dressed and usually with a wine glass in hand. Very interested too with lots of questions that were a pleasure to answer. For most, it was the first time they had seen a proper model railway layout and it wasn’t what they had expected. 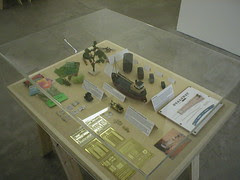 Over the next three months, every few weeks I took my bag full of modeling bits and a bite to eat in to sit beside the layout and make things up. Quite a few of the wagons running on Flockburgh emerged from these sessions. While I worked, visitors came to watch and ask questions. Again, most had never seen anything like this and were genuinely interested. I’d been a bit concerned that bored Birmingham youth would be using the free to enter gallery as somewhere to get out of the cold. As it was, this didn’t happen – the curator in charge of each room was able to read rather than act as a bouncer. The displays around me changed occasionally – I have a fine paper penguin, the result of an excellent set of instructions provided the paper folding society – and some were more interesting than others. Pen and nib collectors mounted a terrific display, much of which had been sourced locally from Brummie factories closing down.

Several visiting groups stick in the mid – a graphic design course tutor & students were particularly interested in the selection of Hellingly luggage labels attached to one of the fiddle yards. The varying typography was the cause of some discussion. I gave them a bit of spiel about old fashioned railway posters and the fact that these employed some of the great artists of the period. These things aren’t just for anoraks, they really are great examples of design and should be able to stand amongst any other artworks.

Another group were serious art nerds and we had quite a discussion around what constituted art. Apparently they felt that I wasn’t just taking part in the art installation, I was part of it. I am (or at least was) art.

Read more about the instilation here.
Posted by Phil Parker at 2:18 AM