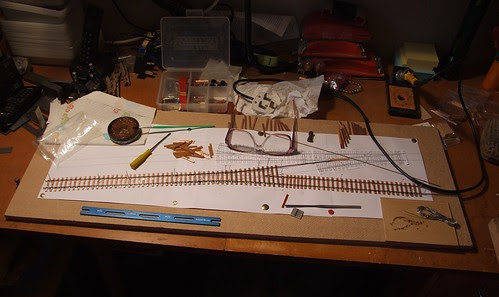 Don't tell anyone, but I'm not actually very good at building track.

I know the theory and when pushed I can do it, but my Dad is a lot better. Therefore he gets this job whenever we build a model railway. It's partly for this reason that the Hellingly Hosptial Railway was built twice. Version One had my track and didn't work properly. Version two had his and things run a whole lot better.

Anyway, the plan was shipped off to his workbench where it was pinned to a nice new sheet of softboard so soldering could commence. In an effort to make things work as well as possible all the track will be built in a single piece. The less joins the better.

While you can get away with this much easier on a micro layout, it is still possible to employ similar techniques on larger projects. Whole sections of pointwork are better built in one piece than as separate items subsequently joined up. The "flow" is better and your chances of a dry joint at a later date are much reduced.
Posted by Phil Parker at 6:48 AM

Many years ago RS Components used to sell a packet of Magneto Files. Now these are slightly flexible, thin files. Very useful for modelling. I found that you could file out a 4mm scale flange gap with these and gradually things would run, so much so that you could tell Jacksons wheels from Gibsons just by how they went through the points.