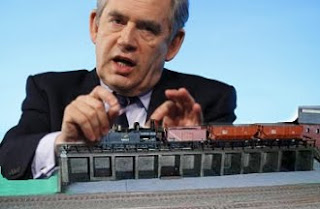 With all the election stuff going on, and endless pointless news coverage, I feel it’s time to leap on the bandwagon.

Most of us see our hobbies as a welcome distraction from the “real world”. A chance to spend time making something as a diversion from work allowing our minds some down time to recover from modern day distractions. Most would think that the latest election results won’t impinge on this, but I beg to differ. In subtle ways whoever gets into power and what they decide to do will make a difference even in the world of paint, glue and soldering.

Let’s start with the obvious. Whatever the hue of the politician eventually ends up standing on the doorstep of number 10 Downing Street, they are going to have an economic mess to sort out. Most political commentators anticipate an increase in VAT to help refill the chancellors coffers. This tax is levied on non-essentials (in theory) and since model railways and boats are a luxury product, the prices will rise. Modellers whining about the list price of the latest RTR locomotives would be well advised to buy now as things aren’t going to get any better. Even the cottage industries who aren’t VAT registered will still see a rise in raw material costs that will need to be passed on to us punters.

Real life railways may also suffer. No one will want to pump money into them and so we can expect to see take-overs and consolidations between operators. That means lots of rolling stock getting a repaint or at least those new fangled vinyl stickers that do instead of paint nowadays. This is an opportunity for the RTR manufacturers to sell more models after a simple livery change rather than any expensive retooling, which will help their bottom line and hopefully keep them in business. The downside is that anyone obsessed with representing the current scene accurately will be digging deep to fund this.

Infrastructure isn’t going to see much investment either but that can be a good thing – you’ll not see the death of semaphore signalling for a few years making a bit of prototype research that bit easier. It will be interesting to see how some of the more modern buildings weather too. Was it really clever to put Waterloo’s steel skeleton outside the glass roof where the rain hits it ?

And finally, there will be what economists call “a contraction” in the economy as a whole. If you work in the public sector (or are an MP) then there is a reasonable chance that you are going to find yourself with a whole lot more modelling time over the next few years, coupled with a dramatic reduction in income.

Will this see a move from chequebook modelling to more craft based work ? The raw materials for most of the buildings at Pendon cost very, very little for example, it’s just that the time required to achieve those results is huge. But if you need to trade cash for time then maybe this isn’t such a problem – it’s better for your brain than watching daytime television and a whole lot more satisfying. I think this is what’s called looking for the silver lining in the cloud.

When people are made redundant, there is the temptation to try and turn a hobby into a business. Look out for more adverts offering to build locomotive kits for cash. Having done this I know it’s not, unless you produce work of exceptional quality, a route to riches but I can see the appeal. We will also see a proliferation of cottage industry suppliers. Resin casting is easy to do at home so if you can make decent quality masters so it could be an option. The problem here is finding a subject that will sell – the big boys have gobbled up all the obvious ones and even some of the oddball stuff. Kit production opportunities in 4mm and even 7mm scales are tiny now that so much can be bought off the shelf. That won't stop anyone trying thank goodness.

If this doesn’t strike a chord – how about taking inspiration from the event itself ? A model set during an election would be different. A few suitable posters and a loudhailer van would be enough to set the date of the model pretty quickly yet take very little effort on the builders part.
Posted by Phil Parker at 6:09 AM

I think it's a little insentitive to say that a lack of investment in the infracstructure "can be a good thing". I think those who worked previously for Jarvis and VolkerRail would certainly disagree. A choice between modellers being able to easily research aging infracstructure and paying your mortgage isn't going to be hard!

A lot of people are hoping that more investment will be forthcoming now the election has passed - Network Rail have held back on putting many projects out to tender despite having a lot of money sitting there waiting. One effect of this is the amount of skill being lost from the industry; although many will try and seek further work on the railway many will move indstries or even countries having had enough and it will be very hard to recover from this.

Although I'm across the pond and a builder of Canadian railways, I've got your blog in my daily blog roll. Posts like this just prove to me you are one of the few hobbyists who actually "get it".

James - good point. The important word in the sentence though is "can". Much as I love olde-worlde signalling etc., I prefer to see proper investment in the railway system even if it does mean that some stuff no longer has a place. After all, we can go to a preserved railway to see history. The real thing has a job to do.

Interesting point about the loss of skills though. You've highlighted something I and probably many other people, wasn't that aware of. I suppose that many of the skills learned are transferable and if you have the option to move to another industry or country, who can blame you for doing this. Lets hope that Network Rail starts to release some of those funds. Perhaps that I'm wrong and a future government sees potential in rail travel and invests.

Dana - Thanks. Don't worry, there are more posts to come !

Hahaha, nice bit of Photoshoppery there!