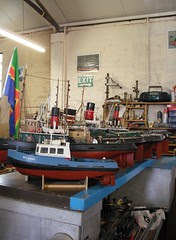 Boat modellers don't have the advantages enjoyed by their equivalents in the railway world. Not for them the regular trips to halls full of display models and traders eager to lighten visitors wallets. Boat clubs it seems, don't organise their own shows.

Of course there are a few professionally put together events such as the International Model Boat show and very good they are too. However they are few and far between. I doubt there are a dozen significant (more than a pool and single trader) events in a year in the UK.

This may all change however as manufacturers start to take things into their own hands. Deans Marine have run an "open house" for many years. More recent is Mobile Marine Models version. As well as opening up the factory (fascinating on its own) and filling it with stuff, they also have competitor firms under canvas outside. Deans Marine, an electronics supplier, Tony Green Steam, a submarine stand, Scale Model Flags, Brian's Scale Lettering, SHG and Model Platforms Hovercraft - a pretty good selection

Sailing is limited to a small paddling pool. Club displays this year weren't exactly fulsome either. One club seemed to see it as a way for members to sell off their models - but then it saves postage over the eBay option. I wasn't tempted. Much. OK, maybe one but I stood firm and haven't added to my fleet.

On the other hand I did come away with a small stash of tools including a giant sanding stick. Some useful other goodies which will be more fully explored here are in the bag as well. Not all for nautical model making either !

A slightly creepy moment was provided by the "spot the girl" competition - visitors were invited to spot a girl from the photo on a leflet. All we had to do was ask her name and identify the stand she was on to qualify for a draw to win a £10 voucher. Maybe it's just me but I can see a few issues with this apart from the obvious one - the girl in question was pretty much the only person under 35 at the event and whoever does the leaflet needs to understand that photos look much better if you don't horizontally compress the image. MMM have always gone for a slightly odd amateurish "sex sells" policy in the adverts so I'm not surprised they have innovated in this area but the truth is they don't need this - the kits look great, the spare parts very nice and the owner really know his stuff.

Anyway, keep an eye on the website and if you fancy a trip just north of Lincoln, turn right at the giant golf ball (courtesy of the RAF radar engineers), I can recommend it. 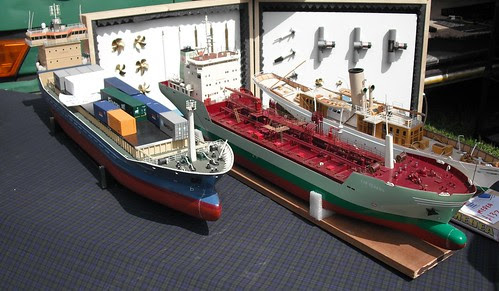