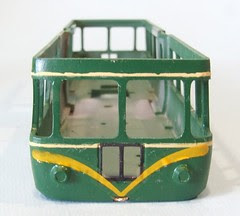 The Park railbus sported a fine set of what BR called "speed whiskers" in its early life and it was these I wanted on my model rather than the yellow warning panel applied later. The shape is distinctive being quite chubby compared to other DMU's and the Dapol transfers are a good representation of them.

Sadly when I actually try and put them on my model I have to wonder if anyone have ever managed to get or these to sit on the model properly. For instance there is as much transfer film beyond the edge of the yellow as there is withing it. Since the whisker has to skirt the headlights that stops the things sitting down. Cutting the excess film away reduces the adhesion so you'd need to fit them superglue. That film isn't helping around the headcode box either.

Then the colour is far too yellow, except where there isn't enough ink on the end of one. Basically they are useless. No matter how many proprietary decal adhesion and softening products I use, they won't do.

Plan B involves using the Fox transfers. They are a bit spindly but will fit. The ends are square but I hope a bit of touching in with body green will sort this out.
Posted by Phil Parker at 3:25 AM

Try getting this lot to print some for you - http://mander.it/en/decalcomanie-a-secco/

No film, crisp edges, and a dry fix, then varnish over (matt). Dont worry about dust, just tell the rivet counters they are dead flys youve modelled!.

I only recommend as they did some whites for me for some old tankers. Just emailed artwork to a friend to touch up, and he told me this lot eventually supplied them. I didnt deal direct personally, but they were in my hand inside a month, and I know he didnt have access to an old ALPs printer to do them himself.

Unless I can find commercial in Germany, I'll be going back to them to see if they will do some DB wagon stuff in N.