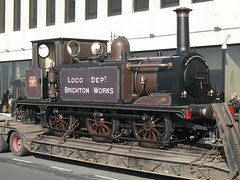 With last years Modelworld being so good, and my Dad having a significant birthday on yesterday, we decided to give the show another go. A quick check showed that a train trip would cost more than buying an aeroplane, but it's only a couple of hours drive.

Travelling on a Sunday seemed a good idea. The M25 would be quiet and there probably wouldn't be a queue to get in. Most serious modellers go to shows on the Saturday so they can enjoy being shoved around in crowds and struggling to see things. The second day will always see only 40% of total attendance with consequently quieter gangways.

Well, the M25 bit worked OK. After a stroll along a sunny sea front, we still had to queue up for a few minutes to get in. I'm not moaning - this is the sign of a good and popular show. They had even provided us with a Terrier locomotive to look at while waiting ! Anyway, the show was crowded but getting around wasn't a big problem.

At this point I expect you are thinking I'm going to ramble on about the model railways. You'd be wrong. There were layouts and plenty of them but to be honest nothing jumped out at me as much as previous years. Those I liked I'd seen before, but then I have attended a lot of shows recently. No, there are trains but we don't go for those, we go for the mix of hobbies under one roof. If you take the toy-train blinkers off, then there is good stuff to be found. 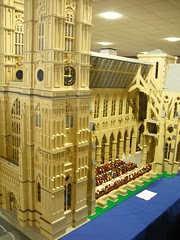 First up, Lego. Yes, it's for kids but they don't build a huge model of Westminster Abbey. How this thing is moved I don't know but it must be a challenge. On one side the building is complete and very recognisable. On the other it's open and you can see the interior detail and congregation. To top it all off (pun intended) the attendant looking after it was wearing a hat that looked like a brick, made out of bricks. I think I might have plans for fashion range...

There were also a couple of Lego railway layouts featuring trains that looked very much like real British ones. A 0-4-4 tank was running well as well as a tube train and couple of pannier. OK, it's possibly not "real" model making, it is impressive and looks much more fun than trying to make a P4 layout work. For the older plastic brickie, there was a big display of Betta-builda from the 1960's. Their centrepiece was a 5 foot tall Leaning Tower of Pisa.

Moving on, I had a go at a radio control car simulator which saw me trying to pilot a model stock car around a carpet circuit and failing miserably. The demonstrator made it look so easy too. A bit later on we watched the real (model) things trying the same tricks and doing not much better than I was. Well, apart from clocking up a lap every 3.5 seconds that is. 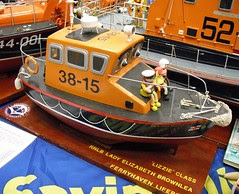 Down at the boat pool there were lots of vessels on display including possibly the largest number of lifeboats I've seen under one roof. Several were of types I'd not seen before including the Lizzie class - from the books by Dora Thatcher. Lizzie is the RNLI version of "Thomas the Tank" and very nice she looks too. I'll keep an eye out for the book - the model looked lovely.

With the 100 year anniversary of the Titanic sinking, there were lots of examples on display from tiny Lego ones to radio control versions. Lots of memorabilia was on show too. The only downside was that while the model was shown off in the pool, that dreadful Celine Dion song was being played. The one that makes you wish the thing had sunk faster and with one more person on board... 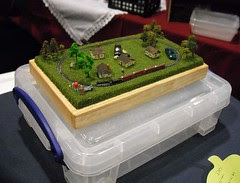 I suppose I should mention one railway layout, which was in the dolls house section of the show. It was minuscule and yet appeared to work rather better than many larger versions. Sitting on top of a lunch box, the train moved around the oval of track as smoothly as you might wish. Closer investigation leads me to think that a toothed belt is involved but I can't be sure. I would like to have a go at making one myself though.

If there is an indicator of a shows interestingness, it's probably the number of photos I took. Despite ignoring most of the layouts, I still managed over 80. There's no rhyme or reason to my choices, just that I found the models interesting. You get plastic cars, boats, trains, Daleks, buildings, and a toy atmoic power plant. Some of these have been uploaded to Flickr and others will join them in a few days time as I concoct blog posts around them.

See the photos on Flickr
Posted by Phil Parker at 7:00 AM

Sounds like a superb show, apart from the Celine Dion. I often find myself more entertained by the slightly more "fun" stands where people are less po-faced and serious. Betta Bilda! I wish I'd seen that! I had a huge set given me when aged 10, I suspect to compensate for the arrival of my brother, "Big Sandy" aka the terminator. Anyhow, I have so many good memories of that. Thanks for reminding me!

And your parking charges were? I just can't bring myself to go to the Brighton show now even though the footfall suggests that it's excellent. Maybe next year.

Actually the five foot leaning Tower of Pisa is made of Bayko an early plastic architectural toy.
Launched in 1934 and originally made of Bakerlite if was produced until 1964 when it was phased out after being aquired by Meccano in 1959.