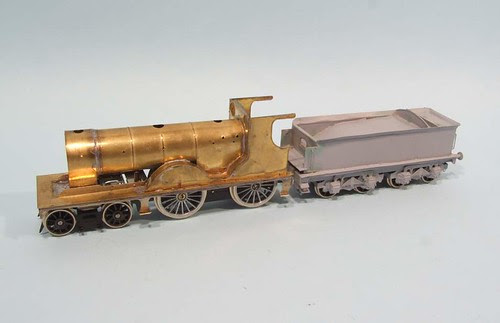 Sometimes you have to admit defeat. The Dunalastair project has been hanging around since 2008 and I'm finally giving up on it. The locomotive nearly works but not nearly enough for me. Truth is though that the long build time is more to do with the frustration I feel with the model than any particularly unsolvable issues with the kit. OK, it's not perfect but most of the problems are in my head. If you aren't ever in the mood to build something, it's time to stop.

However, there's too much effort gone in to this model to chuck it in the bin. Also, I bought the guy I was building this for a new kit to replace the one I've been working on so there is the little matter of trying to claw back a bit of the lost cash. Hence, the model is on eBay. I don't know if it will sell, but it's got to be worth a go.

You can see the auction here.

If, at the end of the week, no-one is interested then I can always strip out the wheels and gears but I hope it doesn't come to this. It would be nice to think that someone with more commitment and skill can finish the engine.
Posted by Phil Parker at 7:00 AM