You never know when you need to drill an Emu egg 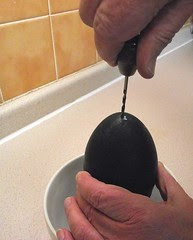 The great thing about having loads of model making tools lying around, is that there are all sorts of unexpected jobs they can be put to that aren't about building tiny little things.

Take this one - my Dad's first job was in a zoo. From here he acquired Ostrich and Rea's eggs. He never got around to getting the emu one, but for 50 years has wanted to complete the set. Thanks to a chance meeting with the people at Puckpitts Farm, he has finally managed it.

Emu eggs are dark green. He knew this but it was a real surprise to me. Think BR (or if you must, GWR) green and you're not far off. Perhaps more bluey than yellow, it's not bird egg colour.

The problem was, the egg arrived full of emu yolk. You can't put that on display for very long so we had to make holes in it to empty the shell. That shell is tough and we had to drill through it in the same way we deal with holes in metal. Starting with a new 2mm drill in a pin vice, the holes was enlarged to 4mm and finally 6mm. No power tools were used, just finger power.

At the opposite end, a 2mm hole gave us a way to blow the contents out into a bowl. These were then whipped up and turned into omelette's for 3. One emu egg = 10 chicken eggs so these were decent size meals. They tasted just like chicken egg omelette's too. Yummy.

Puckpitts farm website
Posted by Phil Parker at 7:00 AM

Yes, I think hand drilling is was the best idea. I think I'd have been tempted to use a tile bit for that job.

Have you seen egg bot ?

An emu egg goes such a long way and makes a fine omelette !!!

Not really a question – this is a proven idea. Another ‘emu product’ that you may be interested in is the feathers. I suppose you were given a few (get a plastic bag full). The emu-farmer will have lots as they moult and pluck out feathers regularly. The feathers can be trimmed to look like ‘ferns’ or ‘tree ferns’. Superb for O scale (7mm). Give them a rinse to get rid of dirt, and after a quick trim with scissors, they only need some green dye or paint. Nothing is wasted - the offcuts can be used in ‘typical bush scenery’ (well typical for an Australian bush scene).

I have had a look for photos but couldn’t find any immediately, but they have been used on many dioramas and layouts by the narrow gauge modelling fraternity here in Australia.