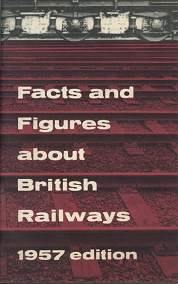 I pick up all sorts of rubbish sometimes. Last weekend, among the goodies for sale was the booklet "Facts and Figures about British Railways  1957 edition"

It's a bit of a dry read, what with being all facts'n'figures and all, but there is a little gem on page 31 where they talk about the (then) new-fangled diesel traction:

The possibilities of the use of atomic power have not been overlooked. The expert, however, advise that the supply of electricity from atomic power station is the likeliest development and not engines carrying their own power units.

At this point I'm thinking "Wow, someone thought it would be a good idea to have trains with nuclear power plants running around ? I wonder what such a loco would look like.

Anyway, that was where this post was going to end. Perhaps a little speculation or comment on the lack of futurist model railways, but that was it. I've been spending all hours at work this week and any time normally devoted to model making has been used instead to show "Happy Feet 2", a film whose only plus point is that it isn't "War Horse" which I've seen three times and will probably be watching again while you read these words.

Google changed all that. Searching for "Nuclear powered train" out of curiosity, I find this article on BarentsObserver.com entitled Russia designs nuclear train. Fascinating.

Better still, they link within it to another piece which has pictures. The text is Cyrillic and thus a bit impenetrable (I know, Google translate but it's not great with technical stuff). Who cares. I want to build me one of these - what a locomotive !
Posted by Phil Parker at 7:00 AM

There was a nuclear powered ship, the USS Savannah built in the late 50's. I can remember the Eagle comic had a series of cutaway illustrations of it plus other wonderful engineering www.eagle-times.blogspot.com which were inspirational in my choosing a career as a technical illustrator.

In the BarentsObserver.com article, I found this amusing: "Russia is currently building the world’s first floating nuclear power plant."
I guess the writer is unaware that the Americans have had nuclear powered submarines since 1954...

I think the nuclear power plant mentioned is a floating power station. Both sides managed to stuff reactors in subs and surface vessels.

As for the Savannah - I think I have a kit for that tucked away somewhere...