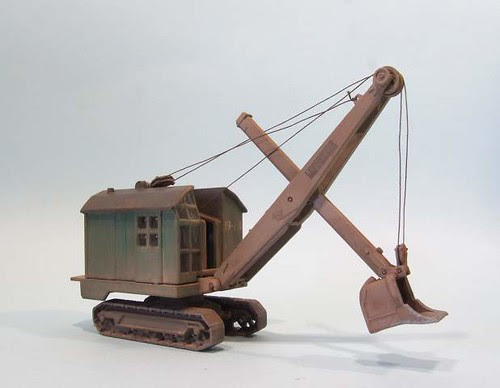 The Corgi die-cast model of a Ruston-Bacyrus face shovel (as in digging at the face of a quarry, not stuffing food into your cakehole) has been knocking around my workbench for some time while I work out what to do with it. However, a project has popped up which can make use of the model so I dug it out of the packaging and took a proper look.

In days gone by, if you wanted something like this for your layout you would be scratchbuilding or digging into the Langley Models range. Now you can head off to the model shop, hand over 16 quid and get something that approaches the quality that the kit built version can provide. I say approaches because quite a lot of compromises have had to be made to the complex prototype in order to produce a model that people can afford but it is still stupidly good for the money.

Of course I can't just take such a model out of the box and use it. There are parts I really don't like such as the tracks which while a really excellent casting, have been coated with the same stuff that novelty pencil sharpeners are supplied in. A sort of bronzey colour that I suppose is to emulate the oily steel of the real thing but looks (to my eye) rubbish. Not to worry, a quick coat of primer and then some paint sorts this out.

The body would probably benefit from stripping and then a repaint but I couldn't be bothered. Instead it's been weathered heavily and the window glazing replaced with Krystal Klear. At the front, the bucket set-up is really nice and just a wash of dirt followed by a shot from the airbush and some weathering powders did the business. Actually, this is a job idea for powders. Plant like this pretty quickly takes on a gritty look that is hard to do with any other method.

Once in position, I'll be tightening up those cables and the model will be ready for use. Not bad for a few hours titivating.
Posted by Phil Parker at 7:00 AM

This is very nice indeed, really well weathered too. The sort of thing I should make for my model of Cwt-y-Bugail...I'm told that there is one buried under one of the prototype's tips!