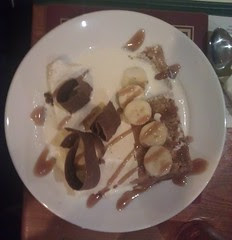 We watched the weather reports on Thursday with some trepidation but Friday dawned clear of the apocalyptic snow that had been forecast. Even the side roads near Wellesbourne Airport, my venue for Lunch, were clear so the motorways weren't expected to give any problem, and so it turned out.

The show was a decent size and had a surprisingly good mix of trade. Some of the BRM events are are "box-shifter" heavy but here you got a real range of RTR and specialist trader. Layouts were less varied but then they are based on those that have appeared in the magazine so it's more important that you get to see things you've read about rather than an esoteric selection.

Talking about reading, the one thing you must do before taking part in a Warners organised show is read all the paperwork. Not just the first paragraph but every page. If you don't then you'll turn up at the front of the building and not around the back where you can unload the layout. 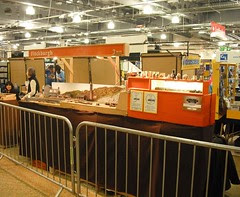 Likewise, you'll know to bring a receipt for fuel along so you get your expenses and not have to wait for a cheque. You might even have the right sort of extension lead (not a wind up one) although no-one noticed and I didn't shout about it.

To be fair, this is all on the paperwork and the efficiency of organisation is exactly what you would expect from a professional outfit. OK, you don't get the sort of assistance with loading and unloading that a club might offer but then the floor is marked out and people know where you have to go when you arrive. The show looked more like a trade show too. For example, the TV monitors were showing photos and videos of the layouts on display. It was a little disconcerting seeing your train set on half-a-dozen screens at once but quite nice too.

Accommodation was in a Holiday Inn Express a couple of miles away. Clean an efficient with working showers in the rooms - I was perfectly happy with this. The breakfasts were a bit so-so but there was loads of food and we were able to eat at a time to suit rather than at the whim of a proprietor who doesn't understand that I want to be at the show by 8:15 on Saturday.

Food provided the most unusual aspect of the show. Having checked in on the Friday night, we headed off to the pub next to the hotel. I ordered a couple of burgers and then spied the cake counter. It seems that they specialise in massive cakes. Each was the 5 inches high. Now that IS a cheesecake !

In the interests of science and research, I had to have a go. After much deliberation I went for the Banoffee cake you see in the top picture. On ordered, I was a little surprised to asked if I wanted cream or ice cream with it - like more calories would have been a good idea ! 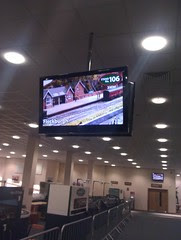 The pudding duly arrived in a bowl, swimming in single cream and I started out a the thin end of the wedge. After 20 minutes I gave up with a third of the desert left. That's a third in length and more in volume. Now I'm a fat bloke who likes a pudding but this wasn't a desert, it was a trial by chewing. Mind you, looking around the place, there did seems to be a few people who might have considered it no more than a light snack...

Anyway, the layout worked OK. One tiebar needs replacement as my quick tweak resulted in the copper clad coming free from the paxolin base. Our buckjumper developed a limp after sterling service all Saturday and the Class 26 needs it's pickups fiddling with. No one seemed to notice and we fielded a lot of "Why don't they make TT any more ?"comments. Mind you, one guy did ask if the stuff was easily commerically available and on being told it was as long as you liked making kits, had an attack of the vapours at the very idea that model railways should involve making things yourself. I probably didn't help by pointing out that the appearance of RTR 3mm stuff would see me departing for S gauge...

My pictures from the show on Flickr. Yes there are some trains.
Posted by Phil Parker at 7:00 AM

Thanks for the pics. Cakes AND champagne!