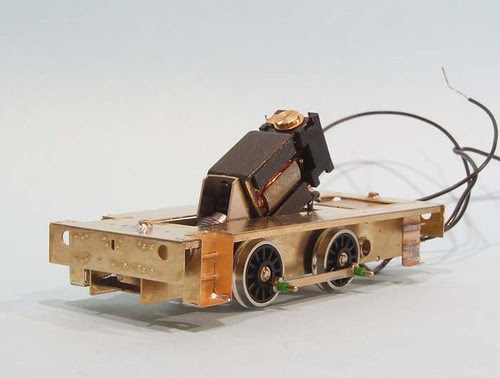 I'm not sure about this motor - it's too big to go through the hole provided in the footplate without a bit of wiggling. I've offset the thing to the side a bit and so it's only the electric connections that are in the way. More of an issue is that thanks to the back of the under-bonnet hole being in the way, it can't lean back as far as it should.

On the other hand the rest of the footplate is a joy to build. The buffer beams were fitted in the half-etched lines provided. I did this with the footplate off the chassis in contravention of the instructions, soldering around the frames doesn't seem that clever to me. Or maybe I'm just not clever enough to do it successfully. Two sets of beams are provided in case you are building an industrial loco with deeper requirements.

The front steps are brilliant. A quick fold makes the basic box and then the treads slot in to holes in the back, to be soldered from the rear. No cleaning up ! At the back, the treads fold to right angles and have to be laminated in place. I managed this with heat and flux as I couldn't be bothered to set up the RSU, although this would have made it easier. On the other hand, a half-etch locating line under the footplate is so much nicer than trying to position steps by eye under a cab doorway.

One change I made was to use bigger bolts to join footplate and chassis. 10BA rather than 14BA. Can't be bothered fiddling around with tiny fixings if I need to do anything during a show. My only regret was fitting the nuts too early and not having a flat top to the footplate while I was attaching all the other stuff.
Posted by Phil Parker at 7:00 AM