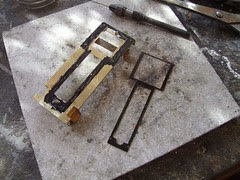 The 01 diesel kit is a bit different from the norm in its design. With most diesels, you solder the body to the footplate. Here, the design allows you to unbolt the two parts to make painting easier. It's the sort of thing that serious modellers talk about doing, and to the rest of us sounds good but is too much work.

Not this time - a sub base is provided which is bolted to the footplate and then the cab/bonnet parts are built around.

The instructions suggest greasing the two parts before bolting them together. Then the brass nuts are soldered in place yet hopefully the two parts can still be separated. Supplying steel bolts is an excellent assistance to this too. Soldering steel is a pig of a job requiring flux as corrosive as the blood in the creature from the film "Alien". I've done it but it's horrible. And you have to travel across the galaxy and kill a vicious extra-terrestrial.

Anyway, I started by colouring in the two parts with a CD marker. Solder hates dirt so let's give it some where we don't want it to go. Then some Vaseline lip balm was smeared all over sub-base. Finally, the bolts were oiled and the two parts bolted together.

With some trepidation, I fluxed each nut and soldered it with the minimum of solder. After this cooled I gingerly tried the bolts and was pleased to find every single one turned ! OK, so this whole procedure took a bit of time, but it's a heck of a lot easier than trying to free a soldered up fixing. Ask me how I know ! 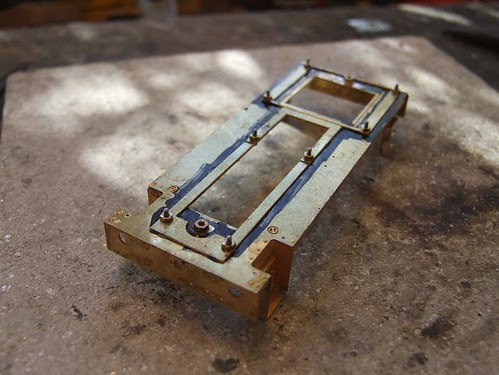