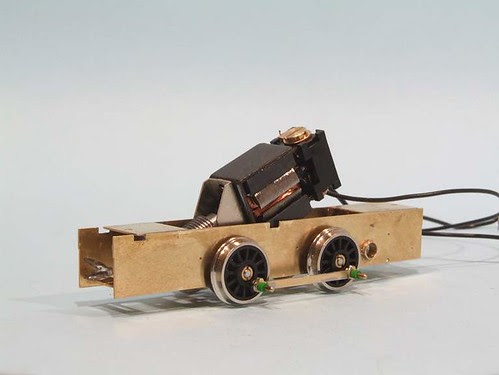 When I bought the 01 kit, I must have asked which motor and gearbox was recommended and bought them at the same time. I know this was Railex so supply wouldn't have been too big a problem unlike many shows.

The instruction say you use a bit of a whopper for such a tiny model locomotive. Specifically a MH1024 motor in a Markits MM210 gear mount. That motor is better know in the klitbuilding fraternity as the DS10. It's been around for at least 30 years and it's brothers have powered many a kit-built engine around layouts across the world. It might be old technology, but it works.

The gear mount is the usual fold-up jobbie and as seems the case every time I get one, the motor mounting holes were in the wrong place. Yes, they held the motor but the 40:1 gears weren't even in the same postcode, never mind in mesh.

My usual trick is to file the screw holes into ovals so the motor can be tweaked up and down. The central holes for the shaft to poke through was also wrong but instead of altering it, I just hacked away a chunk of the massive plastic boss that the shaft emerges through. Heaven knows what it's there for (go on, someone tell me I've done a bad thing) but the motor still works after my surgery. It might have been prudent to test it before I did this though.

The unit drops in nicely between the frames. Even in OO there's loads of room. With some leads attached the chassis was soon scooting around the modelling board. The mesh isn't perfect, it rattles in reverse which means I need to tighten it up a smidgen, but it works well enough for now.

One point, the motor has a shaft coming out of each end. To remove the excess from the top you are "supposed" to file it away or use a min drill. I can't be bothered and suspect both methods would generate bearing melting heat. I find my decade and a bit pair of Zebra wire cutters works just as well. I just have to keep my face out of the way of the waste shaft as it tends to fire off at supersonic speeds !
Posted by Phil Parker at 7:00 AM

Hi Phil - you seem something of a whiz at the old brass chassis construction. I'd love to have a go but I don't really know where to start - can you suggest any books on the subject? I'm currently trying to add some coupling rods to some disc wheels and I have no idea where to start at all! Any advice would be really handy.