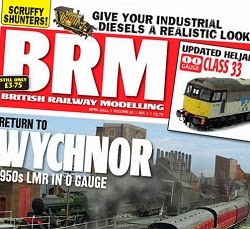 In the first post-Edgeworth BRM of the year, I've not been idle.

First there is a Hornby Sentinel loco weathering project. Regular readers of this blog will know that I was keen to get my paws on one of these as soon as the model was announced. In fact, as far as I was concerned, they could have dropped everything else and just made Sentinels.

In the plastic, the model is impressive, especially for the price. Kitbuilding anything similar will cost twice the RRP, never mind the discounted street prices.

Anyway, having wrestled our review model from Andy's hands, I set about ruining it with paint, filler and weathering powders. This is an industrial locomotive, not a pet so it needs to be properly mucky. While I was at it, I permanently fitted the coupling blanking plate so no-one can have it back and put tension locks in there. Talking of tension locks, we have part 1 of a series on different couplings for railway models. It seems sensible to start with the things dangling off the front of every RTR 4mm model. We'll move on to alternatives next time.

Finally, I'm building another layout. This one is a bit smaller than Edgeworth. In fact it's only 44cm in diameter. Pizza layouts are quite fashionable right now and I had a narrow gauge train set to play with. Of course, I'm doing something odd, so it's a model loosely based on a British Army depot in Germany. A bit of Germany quite near the bit of Germany where they made Volkswagens...

Part 1 takes the model to bare scenery with a diversion into unsuccessful magnets magnetic paint along the way. Next month I'll finish the model (new editor Ben Jones will be pleased to hear that), but here's a sneak preview. 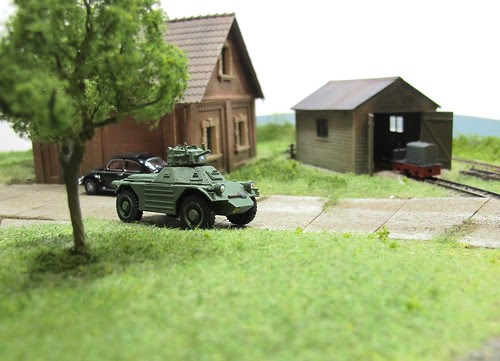 More on British Railway Modelling Magazine here.
Posted by Phil Parker at 5:30 AM

Amazing what a positive difference weathering makes to the Sentinel

Phil, when I worked in Wolfsburg there was a narrow gauge line that went right across the main road twixt Wolfsburg and my favourite restaurant near Giffhorn. Feldbahn, maybe. This was 1997-8 and I think it was still used.