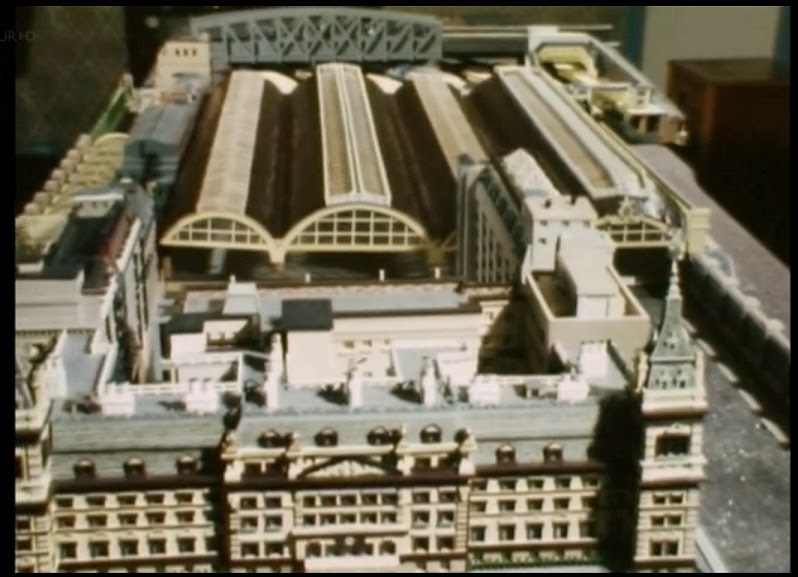 I was catching up on some TV a couple of nights ago - the programme I was watching being Series 2 of Danny Baker's "Brushing up on..." This episode being titled "Miniature Britain."

You can catch the programme on the BBC4 website for a few weeks.

Normally I like Baker but the "talking head" bits he does linking snippets of old documentaries together are quite snide both about the subjects and people in them.

Anyway, at 10 1/2 minutes in, there is a film about Ken Rotherham and the amazing wooden models he produces. What caught my eye first was his Banbury engine shed.

"I know that model", I thought, "It was down the railway club when I joined."

Just as this thought is crossing my mind, the film moves on to Ken's masterpiece - a 7 foot long and 4 foot wide model of Paddington station. It has taken him 25 years to complete and is a marvelously detailed creation, all made in balsa wood.

I remember this model too.

Most of it had been donated to the Leamington club sometime in the very early 1980s. What they were supposed to do with it was lost in the lists of time even when I turned up in '84. By then, the overall roof and most of the buildings were kicking around our damp store room.

The scale was something like 4mm:1ft but cartooned so the trains (also balsa) were shortened and the building proportions adjusted to make a pleasing scene. All of which made it useless to the club.

Some of the model survived for another 10 years until a move of premises forced us to take the remaining items, including the train shed roof, to the tip. Quarter of a century's work chucked in to landfill.

I did save a couple of the train sets including a delightful Blue Pullman. These were returned to the family when a couple of members tried to track the model down a few years later.

This is a great shame but does illustrate the problem with old models. If you've built something large and unwieldy, it's very difficult to find someone who loves it as much as you do when you pass on. There must be many layouts in this position, and looking at the programme, several model boats too.

I saw that abberation of a programme. I can't stand baker at the best of times and this was the worst of his tedious, predictable output I'd seen. As a man who has made his living as a serious modelmaker for most of his life, I was disgusted at the typical media view. "Find the weirdest misfits and make them exemplars".
I would have turned it off, but I was tucked behind my desk making drawings for a serious model car for a customer.

Funnily enough when I was watching the programme I wondered what became of that model.

Very sad to see Teddy Boston being poked fun of in such a way.

Normally I like Baker - his Radio 1 Breakfast show years ago was superb, but this was horrible to watch in many ways. The linking comments were at best snide and mostly just insulting.

The films were interesting but VERY dated. I think part of the problem is that interview techniques are different now and those being filmed have a much better idea of what being on camera means. I think we are also better at presenting ourselves - Teddy Boston's set-up would look a lot neater nowadays in the same way that layout presentation has vastly improved at exhibitions over the years.

Indeed, most of the footage used is available from the British Pathe website.

Most of it proves L P Hartley had a point