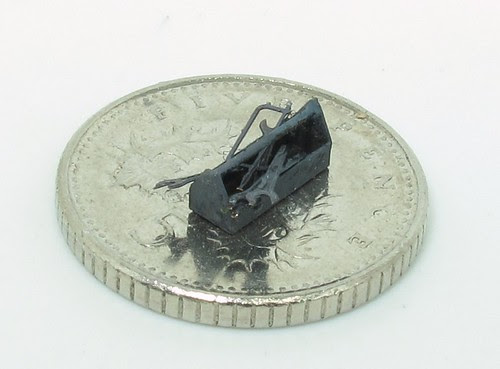 When people ask which aspect of railway modelling I enjoy most, the answer is simple - adding detail.

One of the reasons I build little layouts is that time spent creating fiddly little scenes with tiny details pays off. On a 50ft long model you need a vast amount of detail and even then people are so awed by the size of the model that they ignore most of your efforts.

In a 6ft scenic space, a cameo scene with 2 or 3 figures is a major feature. With a bit of work you can persuade viewers to peer into the scene and when they do, they appreciate the work you've done. My spotting list of animals fixed to the front of The Hellingly Hospital Railway keeps non-enthusiasts enthralled for ages.

Details don't come much more tiny than the one above. A toolbox with spanners made from a Brengun etch of parts. The 2 by 3mm etch contains over 60 tools plus a couple of boxes.

The boxes were folded up and handles soldered across the top. Then everything was dunked or rubbed with gun blue followed by a dry-brush with Humbrol polished steel metalcote.

The results are tiny - that is a 5p coin they are balanced on. I've fixed them to the pizza layout and had to point them out to viewers, who all made suitably impressed noises. Well, apart from those who thought I was mad to do this sort of thing.
Posted by Phil Parker at 5:30 AM