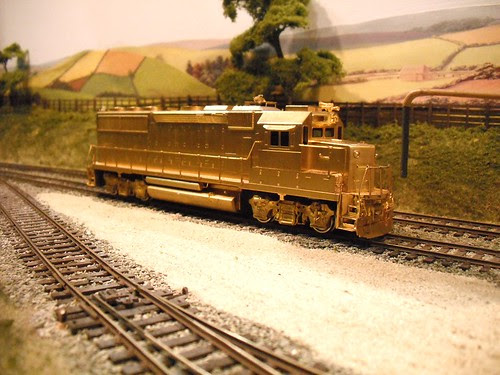 We had one unusual visitor to Edgeworth at Leamington - a Korean brass Ho American loco. Not a normal thing to find on a 1930s GWR branch line...

The model had been purchased from another stall and it's new owner politely asked if we would mind testing it for him. Since you don't get the chance to play with these sort of things very often, and it was a quiet period towards the end of Sunday, I was happy to help.

A superb runner, before I snapped the picture above, the owner was happy to remove the packing behind those delicate handrails so I got the best shot possible.

All in all, very pleasant.

This is in sharp contrast to the grumpy trader who saw my layout and demanded I test something he had bought second-hand. It didn't matter that there were people looking at the model or that I was in conversation with someone. He wanted his diesel tested and he wanted it tested now. Nothing and no-one was more important at that moment in time.

Sadly, I'm not very good at this "the customer is always right" stuff, put it in the fiddle yard and said I would test it eventually, then returned to my conversation. He didn't look best pleased but then he didn't realised that the alternative was being told to @*^& off and go bother someone else. Mine may be a OO layout but it is most emphatically not a load of rubbish for testing tired locos.

Half an hour later, the model was returned with a vague report of it moving but stuttering a bit. It can now go to the owners mate who mends these things, pretty much what was going to happen no matter what I said.

The moral: It is possible to have your new toy tested on a layout but that isn't the main reason the layout is at the exhibition. Wait for a quiet time and ask politely. Don't be surprised when your 1970s model doesn't like the modern finescale track and even less surprised if the layout owner isn't wild about letting the loco crawl over his nicely finished model and won't let it out of the fiddle yard.

Also, it's not the exhibitors job to take your toy apart to make it better. We sometimes will do, especially for beginners (who tend to ask nicely anyway) who will benefit from some advice on cleaning wheels and track. After all, we want to encourage people in to the hobby, except if they are grumpy old men.
Posted by Phil Parker at 5:30 AM