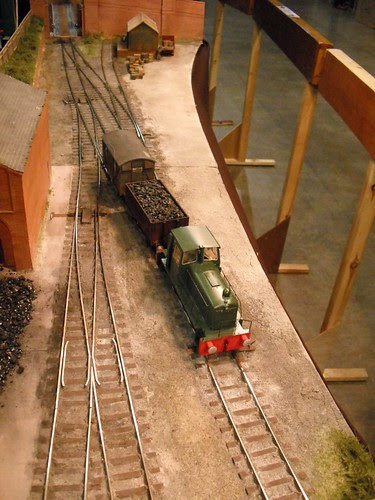 Back in late February, I mentioned that my 7mm scale layout, Clayhanger Yard was for sale. At Kettering show, I was made an offer and accepted it. The buyer was keen enough to borrow a packing end board first to make sure it would fit in his car.

The plan was for the new owner to collect the layout after its final show with me, Leamington Spa last weekend. This happened and now the model has a new home.

It's very possible that Clayhanger will return to the exhibition circuit in the future, probably 2 feet longer than it was when I owned it.

Before handing the model over, I took the time to run a last train.

From the stock box, I selected the big, green, Barclay diesel. While not in period for the model, it was the first locomotive to run on the layout.

Behind this we have a wooden wagon with "Parker" painted on the side. Bringing up the rear is my GWR van with a apparently torn roof canvas.

This train ran around the layout, collected a couple of 1 plank wagons, and left for the fiddle yard leaving the layout empty of stock. After this, the lights were switched off, layout packed up and loaded into a new car.

Farewell, Clayhanger Yard. I hope to see you again one day.
Posted by Phil Parker at 5:30 AM

No regrets Phil?
I sold my previous layout Pen Y Bont to a friend of mine, but to be honest I wish I had kept it now, Just shortage of space for my new layout forced the sale. I still see it out at shows but seeing it without my stock and stuff it's not the same.