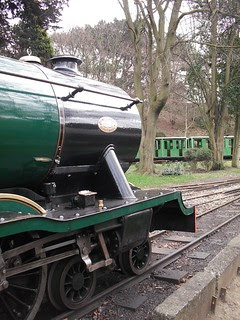 Earlier this week, I took a trip to Scarborough. One of the discoveries I made was that it's a b****y long way from where I live.

The second is that it is home to the worlds oldest 20 inch train ride - The North Bay Railway.

As it turned out, the line starts at Peashome Park which was just behind the hotel I was staying in. Therefore, when I checked out, my first stop was a car park about 3 minutes drive away.

That might sound lazy but while the park, or at least the bit full of pagodas, was a pre-breakfast stroll away, the railway is a bit further but I wasn't sure how far.

Wednesday morning isn't a normal running day but when I strolled over, having ditched the car in a park that was free until 9am, one of the locos was sitting outside the shed. 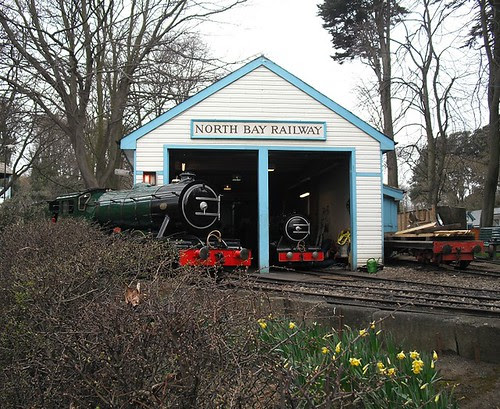 Walking up to the station, I took some photos of the coaching stock. 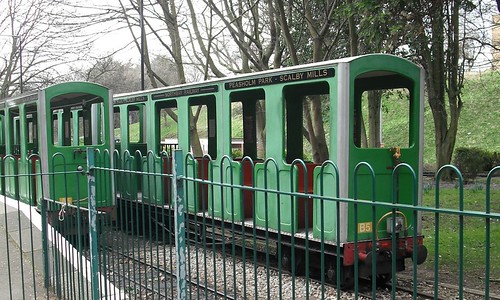 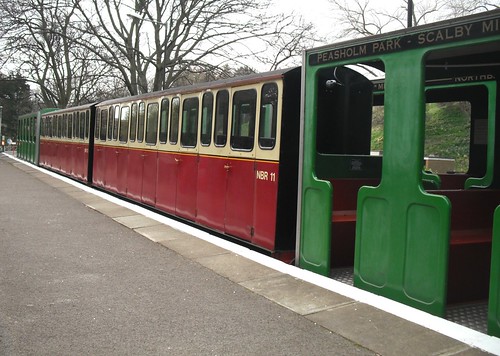 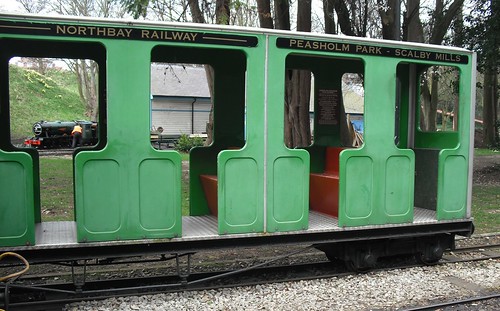 These vehicles are certainly narrow. Apparently the underframes are original but the green bodies date from 1998. The blood and custard set are more recent additions having come from the  Golden Acre Park railway in 2007.
Walking along the road, there are some steps up to a staff-only gate. The loco "Neptune" was stood next to his and here it was I received the biggest surprise. Far from being silent as I'd expected, it was rumbling away with the unmistakable sound of a diesel engine. All four locos on the line are excellent steam outline diesel-hydraulic machines dating back to 1931 and the Hudswell Clarke factory.
Sadly, there was no chance of a ride along the 7/8th of a mile line as daily services don't start until April. Next time perhaps.
North Bay Railway Website﻿
Posted by Phil Parker at 5:30 AM

Those locos had me fooled too! I didn't know anything about this line...it looks worth a visit.

I'm hoping to take a ride on this little line when holidaying in Yorkshire later in the year - I'll post some pics. on my blog when I visit. I had a look at the station at the other end last year, which had some carriages stabled there. They really are quite narrow!
The pub at the Northern end (Scalby Mill?) is worth a visit, good food and a selection of real ales.

Its a great ride. Did it many times as a youngster. The locos Neptune and Triton are the originals but they acquired some more of a similar vintage more recently.