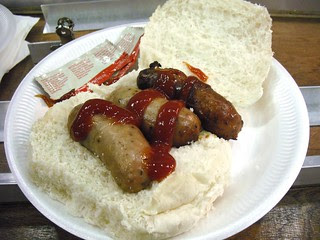 Kettering is a great show to exhibit at. You have to be there early enough to get a parking space at the hall. Very early as it happens, stands must be set up by 9am according to the paperwork, with advance ticket holders arriving half an hour later. Between agreeing to take part and setting out, it seems that Kettering has been moved half an hour further away than I expected but even so, with a 7am departure we were set up in time for a wander.

Well, set up in time for a yummy sausage bap with red sauce. Just what you need after an early start.

As I've mentioned before, Kettering is a funny show. 6 small layouts and over 80 traders. You know what the visitors are coming for, and it's not to see the trains running.

If there is a recession, it wasn't obvious from the number of boxes walking around during the day. I suspect the O gauge modeller decides that if he or she is going by something, trusting it to the Royal Mail isn't wise. Nor is it cheap. Far better to have a day out at a show and get some retail therapy in.

We certainly had a good day. I was busy chatting and operating most of the time. My aged parental spare operator hates 3-link couplings so I save him from too much chain fiddling. He keeps up the supplies of tea and doubles the amount of chatting we can do. Anyway, I can't hold the fascia up to install it on my own... 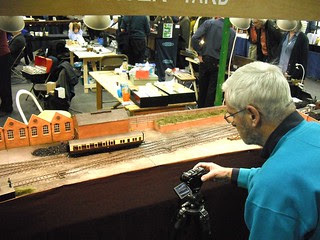 We were on the receiving end of many nice comments. People were fascinated by how small the layout was. It must have looked OK too as Ian Rathbone asked to use it as a backdrop for photos of a couple of coaches.

One thing I spotted was that quality paste tables seem to be the legs of choice for the minimum space 7mm modeller. On one side, the Coney Hill Light Railway was on a pair from Wickes, on the other Eastbridge sat atop a B&Q example. Of course, I put it all down to my use of a Homebase version in the magazine a year ago...


Not many photos this time, but those I have are on Flickr.
Posted by Phil Parker at 5:30 AM