An early start for me - 7:45 at Radio CWR for a quick interview to plug the event. I'm told that it all sounded OK but have managed to avoid hearing it so far. The sausage bap on my return was very welcome.

I know this doesn't sound early but I had to park on the far side of the city and walk across, either that or try to navigate THE RINGROAD OF DEATH. I prefer the walk. Of course, the even really started at noon on the Friday when we were faced with a large, empty hall and had to scurry around marking everything out. To be honest it got a bit sketchy towards the end as despite telling people they couldn't get in until 2, several were setting up by 1.

Laying out a hall is an interesting challenge. Although I wasn't responsible for this one, I've done it in the past. You make every effort to fit things in and still you can't please everyone. On a forum, it was suggested that a headline layout was the first thing you should see on entering the hall. Sadly we didn't fancy persuading either headliner to cut 2ft square holes in their model to fit around the row of pillars occupying the space they would need to be.

Anyway, I was there. How much more headline do you need? 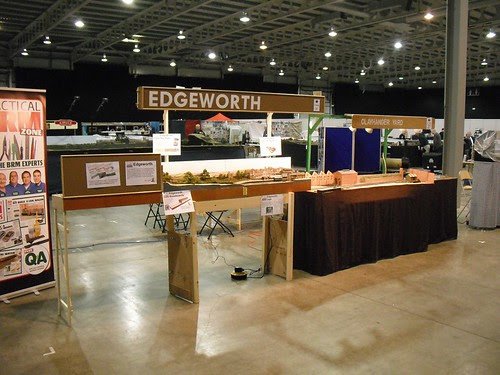 Last year I displayed Clayhanger Yard as a set of bare boards with track nailed to them. The idea was that I would bring it back completed. Which I did. But then, my life has changed and I've built another layout since then and since this is now the famous one, I brought that as well. At least it was a static exhibit.

With this in mind, the layout was shown without a curtains and with several printed sheets explaining parts of its construction. Visitors were encouraged to come around the back and poke their heads underneath - something many were keen to do.

The last few show reports have included something along the lines of "I didn't get out from behind the layout" but in an effort to change the story, I made an effort to get out there with the camera. There were many fine layouts but I think my personal favourite was Loch Tat - a beautiful slice of Scotland in N gauge. The loch that dominates the front of the display is particularly well done and sets the atmosphere up well. 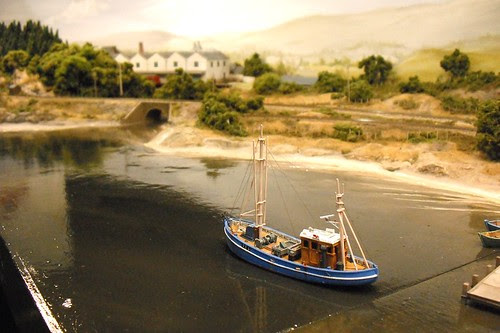 I talked a lot over Edgeworth. Chris Mead generously operated Clayhanger for most of the weekend and didn't complain too much about the 3-link couplings. People said nice things. And it didn't snow. What more could you want?