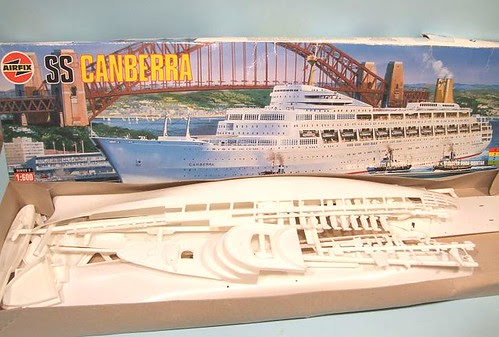 I was given an Airfix model of the Canberra as a child and it came out  of the box white. Roughly forty years later I bought the same Airfix  model again (for nostalgic reasons after I had sailed aboard the real  liner) and to my chagrin it was in a military olive colour. I have  never had the nerve to try to build it as painting an olive model  white seemed a bit daunting.

May I ask what colour your model was to start with?

And how you would go about repainting an olive green ship white?

An olive green kit? That does seem an odd colour in which to mould a boat famously painted white. My kit was the "correct"colour so I didn't have any problems.

Despite this, I still spray painted the model white as I dislike self-coloured plastic. It never looks right and worse, if you need to touch a part up, the paint and plastic colours never match perfectly.

Which I think would be my solution. I'd stick the hull together, possible even some of the other sub-assemblies such as the bridge too. Then a spray of Halfords white primer followed by some Humbrol satin white. Build up the colour with lots of light coats - resist them temptation to try and do it all in one hit or the paint will run. Dry the paint between coats with a hair drier or in the sun.

The process will take time but the result will be worth it. Mind you, if you could track down a white kit, you could sell the green one as "Rare" on eBay...
Posted by Phil Parker at 5:30 AM